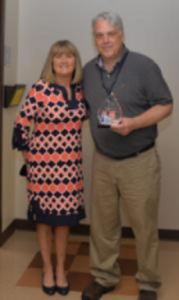 (May 2021) Scott Beegle, MD, has received an honorable mention in the Vasculitis Foundation’s (VFs) 2021 Recognizing Excellence in Diagnostics (V-RED) award program. Now in its eighth year, V-RED has grown into a powerful awareness campaign that recognizes medical providers worldwide for making a critical, early diagnosis of vasculitis.

Mary Meliski of Stillwater, New York, has been a patient of Dr. Beegle since 2009. Dr. Beegle is a pulmonary/critical care physician in Albany. When Mary was admitted to the hospital in February 2009 with severe jaw, ear, neck and back pain, as well as wheezing and shortness of breath, a month went by with no doctor being able to make a diagnosis. “At one point, my previous primary care provider told me all my results were normal, that I must be depressed, and that it could all be in my head,” Mary said.

Dr. Beegle’s team performed a lung biopsy on Mary. When the results came back, they found the antibodies, and the lung biopsy was consistent with eosinophilic granulomatosis with polyangiitis (formerly Churg-Strauss syndrome). EGPA is one of the rarest forms of vasculitis and primarily affects the small blood vessels. Individuals diagnosed with EGPA usually have a history of asthma or allergies. Mary was finally released in March 2009 with an answer—her illness was not all in her head. “Since the beginning, Dr. Beegle has been dedicated to my care and has a bedside manner unmatched by other providers. His knowledge and understanding assure me that my care is in the right hands.”

Dr. Beegle received his medical degree from Albany Medical College where he also completed a fellowship in pulmonary/critical care and a residency in internal medicine. In addition, he completed a lung transplant fellowship at the Brigham and Women’s Hospital, Harvard Medical School, Boston, Massachusetts.

Karen Hirsch, past-president of the VF Board of Directors, is particularly encouraged by the V-RED award program’s success. After her son, Michael, received an early diagnosis of vasculitis, Hirsch created the award to bring special recognition to medical professionals in a broad range of clinical specialties. She believes the award increases awareness among medical peers. The program calls on patients worldwide to nominate a medical professional they want to recognize for making a critical, early diagnosis of vasculitis, thus enabling timely treatment, and potentially sparing permanent and ongoing health complications.