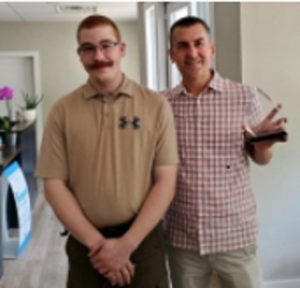 (May 2021) Adam Maass, MD, is the first-place winner in the Vasculitis Foundation’s (VFs) 2021 Recognizing Excellence in Diagnostics (V-RED) award program. Now in its eighth year, V-RED has grown into a powerful awareness campaign that recognizes medical providers worldwide for making a critical, early diagnosis of vasculitis.

Dr. Maass, an endocrinologist in Cave Springs, Arkansas, had been taking care of Hunter Keen since he was diagnosed at age 12 with type 1 diabetes. Hunter’s new symptoms began a week before Christmas in 2017 when the then 17-year-old began coughing up blood. Many doctors were away for the holidays, including the Keen family’s primary care physician (PCP), and three days later the cough grew more intense with dark, bright blood appearing in the sputum. The Keen’s PCP was again unavailable so Hunter’s mom, Sherri, called Dr. Maass, who was also away at the time, but he recommended that an x-ray of Hunter’s lungs and lab tests be done. While Hunter was misdiagnosed with bronchitis and pneumonia, and ultimately spent five days in the hospital, it had been Dr. Maass who insisted on further testing, including for granulomatosis with polyangiitis (GPA). GPA is a form of vasculitis characterized by inflammation of the blood vessels, which can restrict blood flow and damage vital organs and tissues, and typically affects the sinuses, lungs, and kidneys. “We will be forever grateful for Dr. Maass’ close scrutiny and concern for our son’s health,” Sherri Keen said.

Karen Hirsch, past-president of the VF Board of Directors, is particularly encouraged by the V-RED award program’s success. After her son, Michael, received an early diagnosis of vasculitis, Hirsch created the award to bring special recognition to medical professionals in a broad range of clinical specialties. She believes the award increases awareness among medical peers. The program calls on patients worldwide to nominate a medical professional they want to recognize for making a critical, early diagnosis of vasculitis, thus enabling timely treatment, and potentially sparing permanent and ongoing health complications.

Your ticket for the: Arkansas Endocrinologist Wins First Place in the Vasculitis Foundation’s 2021 V-RED Award Program