Often, one of the greatest challenges a patient with vasculitis faces is receiving a definitive diagnosis.  Patients often spend months or even years seeking a diagnosis or worse, living with a misdiagnosis and ineffective treatment.

The idea for the award originated with VF Board Member, Karen Hirsch, whose son, Michael, was diagnosed with GPA/Wegener’s in 2011 by Dr. Juanita Mora, an allergist/immunologist at the Chicago Allergy Center.  ”I followed my gut and ordered further testing,” says Dr. Mora. “The labs and CT Chest confirmed the diagnosis of GPA/Wegener’s.  Michael received prompt treatment, and the early diagnosis was critical and lifesaving in the preservation of his healthy organs and getting him in remission.”

It was a combination of frustration at pediatric experts missing her son’s disease, and the desire to recognize and reward those doctors who do make an early diagnosis of vasculitis, which led Karen to propose the VF V-RED Award. 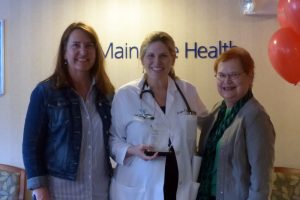 Doctor Honored with the 2017 V-RED Award

Continuing with its commitment to promote early diagnosis of vasculitis, the VF awarded the Recognizing Early Diagnosis Award (V-RED) in May. The V-RED Award is presented annually to a medical professional who made a quick diagnosis of vasculitis, thus enabling the patient to receive timely and appropriate treatment, potentially sparing the patient permanent and ongoing health complications.

“The goal of the V-RED Award is to honor these healthcare professionals because they are a part of our goal to raise awareness about the need for earlier diagnosis of vasculitis,” says Joyce Kullman, Executive Director of the Vasculitis Foundation. “So often our patients fail to get an early diagnosis because vasculitis symptoms can mimic so many other conditions.  We created the VF-RED Award to single out those medical professionals who did catch the disease in its early stages, thus improving the outcome for the patient.”

“I believe my vasculitis was caught early enough before severe symptoms had set in,” says Petersohn.  “If it were not for Dr. Nansteel’s skill as a diagnostician, I would have been in much greater difficulty. I am forever indebted to her.  Dr. Nansteel deserves this recognition for her caring manner with which she followed through in the early days of my diagnosis. It is this combination of competency and compassion that makes her such a special physician and woman.”

Your ticket for the: V-RED Award: Fourth Annual Competition Recognizes Excellence in Diagnostics