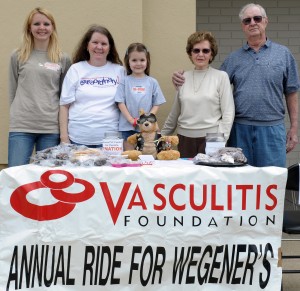 The North Carolina chapter lost a dear friend in May when Shirley Ferguson, the mother of Danette Anderson, a Granulomatosis with polyangiitis (GPA, Wegener’s) patient, died.

Shirley was a strong supporter of the chapter. She attended every meeting and helped to organize Danette’s annual fundraiser that has raised over $100,000 for the Vasculitis Foundation.

Danette says, “I lost my mother on May 25th. She has always been there for me and I thought I was going to be there for her after her surgery. I also lost my best friend, my caregiver, and organizer/supporter of my fundraisers.”

North Carolina Chapter Leader Elaine Holmes concurs,  “Shirley was an active member of our chapter for many years. She was always willing to help. Often she would see what needed to be done to help with meetings and just do it. We will miss her caring support to our group.”

Your ticket for the: VF Loses Dedicated Friend and Supporter