There’s something unique about the Vasculitis Foundation’s (VF’s) 2022 Recognizing Excellence in Diagnostics (V-RED) award program: We have two winners who tied for first place and two winners who received honorable mentions.

Now in its ninth year, the V-RED award program calls on patients worldwide to nominate a medical professional they want to recognize for making a critical, early diagnosis of vasculitis. “This year’s awards demonstrate that persistence has no limits as we honor four physicians who relentlessly pursued answers to puzzling and difficult presentations,” said retired VF board member and program founder Karen Hirsch. “Each nominator has their own inspiring story of what it took to finally receive a diagnosis and begin their journey to better health.”

Karen created the award program after her son, Michael, was diagnosed with granulomatosis with polyangiitis (GPA) in 2011 by Juanita Mora, MD, an allergist/immunologist at the Chicago Allergy Center. Dr. Mora’s quick diagnosis helped Michael receive timely treatment, which helped lead to his remission.

“We are all eternally grateful for the health care practitioner’s curiosity, skills and compassion” Karen added. 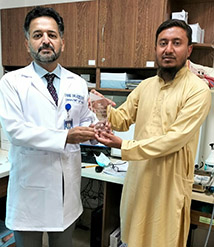 Many vasculitis patients run into delays in receiving a diagnosis but we know that “earlier the better” is a key in getting effective treatment. For 32-year-old Muhammad Umar, he was one of the lucky ones. Back in mid-September 2021, Muhammad experienced a range of symptoms—from a cough, difficulty breathing, “strawberry” gums (swollen and resembling over-ripe fruit), and night sweats to ear blockage and pain, a runny nose, nasal bleeding, and pain throughout his entire body.

The test results confirmed Dr. Aslam’s belief that Muhammad had GPA. “He was 100 percent right. My C-ANCA report was strongly positive (100) and all other test results fully supported his opinion,” Muhammad said. “He told me that I am the luckiest person because I was diagnosed with GPA at a very early stage – in three weeks!” Muhammad lives in Haripur Hazara, a city in Pakistan. 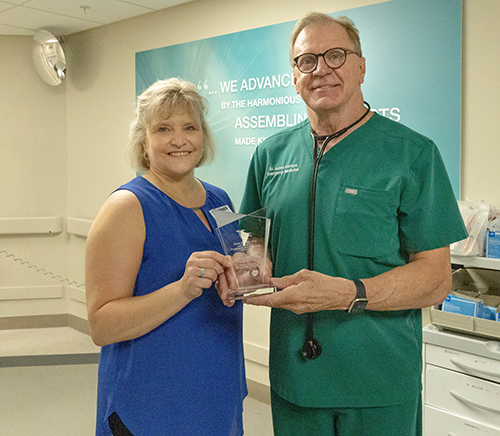 For a year before meeting rheumatologist Dr. Alicia Rodriguez-Pla at Mayo Clinic in Arizona, 54-year-old Sarah Jones was repeatedly told by numerous doctors that she had COVID. Sixteen tests later she knew that it wasn’t COVID even though she had similar symptoms: pneumonia, coughing up brown mucus, fever, loss of taste, and fatigue.

A pulmonologist told her it was gastroesophageal reflux disease and that she needed stomach surgery. An allergist said her recurring pneumonia and bronchitis were a result of allergies; her sudden onset of hypertension (220/110) was dismissed as nervousness, and recurring hives were written off as stress. Sarah’s mother, a nurse who specialized in pulmonary diseases, thought the hives should be biopsied but Sarah said that no one was willing to do that and she felt that no one was listening to her.

Out of desperation, Sarah drove to Mayo’s ER in Phoenix. She had 8”-10” hives, a cough, and shortness of breath so severe she couldn’t talk. “Dr. James Komara, the ER physician, was the first person to really listen to me,” Sarah explained. “He saw a human desperate to understand what was happening and not just an emotional female. This was the first time I felt seen and taken seriously.” Dr. Komara diagnosed pneumonia, flagged the blood eosinophils, injected steroids for the hives, and Sarah was admitted. Mayo culture-tested every system in Sarah’s body and ordered a skin biopsy, during which, eosinophils were found.

“I’m not yet in remission but I’m in good hands with my Mayo team,” Sarah said, setting her on a path to navigate this lifelong journey. Sarah lives in Tucson, Arizona, with her wife, Pam, and their two cats.

The Ablemans were attending a family reunion when Kacey Ableman’s 13-year-old son, Spencer, started feeling sick. Earlier in the day, the family had been doing short hikes in Yellowstone National Park but by the afternoon, Spencer stayed in the car and napped. He was feeling extremely fatigued, which progressed throughout the day. Later in the evening, Kacey’s dad, Dr. Richard Craft, noticed that Spencer didn’t look too good. “When my dad checked him out, he found the symptoms concerning (rapid heart rate, pale skin), which prompted him to check Spencer’s oxygen saturation (02 sat),” Kacey said. “Both his lungs sounded poorly through his stethoscope.” Dr. Craft, who specializes in internal medicine, immediately got everyone into the car and headed to the nearest hospital.

An hour later, Spencer was checked into the ER at Madison Memorial Hospital in Rexburg, Idaho. His O2 sat had dropped to 60 percent. If he had gone to bed with it that low and it continued to drop, he likely would have died. “My dad’s observations and quick actions saved his life,” Kacey said. It turns out that Spencer was experiencing a life-threatening pulmonary hemorrhage (bleeding into the lungs), which was discovered and treated very quickly after he was life-flighted to a larger hospital—Primary Children’s Hospital in Salt Lake City, Utah. A few days later, Spencer was diagnosed with anti-glomerular basement membrane disease (formerly Goodpasture’s syndrome) and microscopic polyangiitis.

“During all this time my dad was also one of the first to suspect vasculitis,” Kacey explained. “He continually asked about Spencer’s kidney function, which turned out to be the key piece of information the ICU doctors needed to get us a consult with nephrology and rheumatology.” Dr. Craft saved many lives in the course of his career, but this time, he saved his grandson. Kacey and her family live in Maple Grove, Minnesota.

We received many wonderful nominations of healthcare professionals who made the early diagnosis and changed their patients’ lives. We are grateful to all of the nominees for their wonderful care and commitment to helping patients receive the diagnosis and care they deserve.

The VF thanks our sponsors for supporting the 2022 V-RED Program.

Your ticket for the: VF Announces 2022 V-RED Award Winners