Vasculitis Foundation Board Welcomes New Members During Its Fall 2018 Meeting 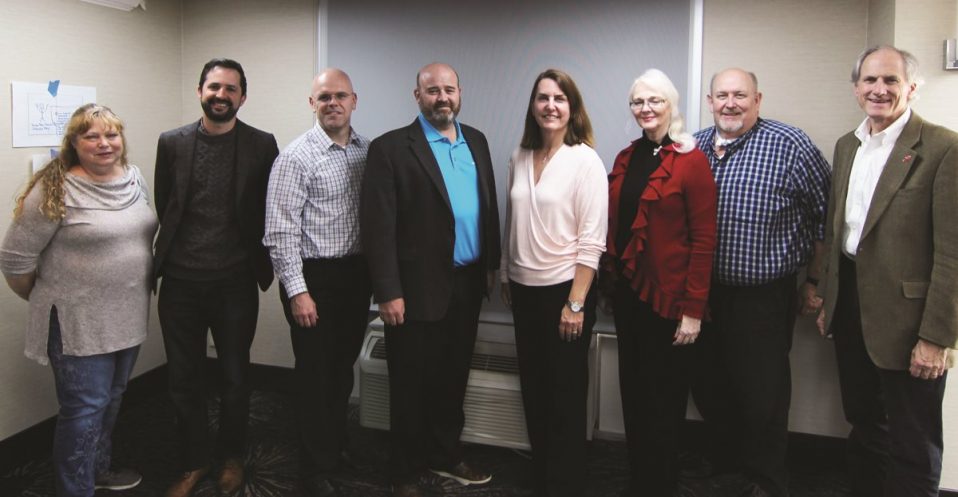 The VF held its annual membership meeting on Thursday, October 18, 2018 in Chicago. Karen Hirsch, VF President, reported on the organization’s accomplishments and recognized Dr. Jeffrey Fishbein, who retired from the board, for his service and dedication to the patients and families of the VF.

Over the past five years Dr. Fishbein and his extended family have hosted the VF Chicagoland Golf Open, raising over $364,000, to support the establishment of the Northwestern Vasculitis Clinic and the VF-VCRC Fellowship Program.

With the generous support of their donors, they have funded four fellowships to train physician-investigators.

The following members were elected to the VF Board of Directors:

• Suzanne DePaolis and Don Nagle were elected after being appointed in January.
• Drs. Peter Grayson and Jason Springer were re-elected for their second term.
• Jason Wadler was elected to the board after a one-year.
• We are pleased to welcome Victor James and Allison Lint to the board for their first three-year term. Victor lives in Stafford, Virginia with his wife, Brenda, a school teacher. He was diagnosed with GPA/Wegener’s in 2012 and recently retired after 34 years as an Allstate Insurance agent. Victor has extensive financial experience running his own agency and serving on committees for his church and other nonprofits. He is active on social media and he and Brenda have shared their experiences as part of the VF Extraordinary Stories’ series: https://bit.ly/2Pv1ox9

Allison Lint lives in Overland Park, Kansas and is a professional violinist for several orchestras. She also teaches music and is the founder of Violin for Vasculitis (V4V), a nonprofit awareness organization. Her goal is to travel to all 50 states, giving free recitals in public venues to promote rare disease awareness. To date the V4V has presented 35 events in 23 states.

Allison has amassed experience organizing events in various venues from start to finish, making personal contact with community leadership as well as vasculitis patients, and navigating the process to gain nonprofit status with the IRS. She was diagnosed with GPA/Wegener’s at 17 and now, at age 30, provides a link between the adult world of VF management and young adults, a population which we observe increasing every year.

Jason Wadler, Glencoe, Illinois, returns to the VF Board after a one-year absence. As Past-President, Jason continues to raise awareness of vasculitis and fundraise for the VF’s programs, including planning a rock-n-roll concert to kickoff next year’s Vasculitis Awareness Month.

New Leadership Elected the VF Board of Directors held their fall retreat after the VF membership meeting.

George Casey, who has served on the board for five years, was elected president, Don Nagle treasurer, Rhonda Johnson Byrd secretary, and Pamela Pekerman, vice president of resource development.

George thanked Karen Hirsch for her service as President for the past two years. Karen is the co-organizer of the annual Chicago Rally in the Alley fundraiser, which has raised over $162,000, over the past five years.

The board reviewed the organization’s current programs and engaged in a special strategic planning session to discuss plans for 2019.

Your ticket for the: Vasculitis Foundation Board Welcomes New Members During Its Fall 2018 Meeting

Vasculitis Foundation Board Welcomes New Members During Its Fall 2018 Meeting