Mother’s Day is this weekend in the United States.  This year we want to recognize all the amazing women in our lives.  We are honored to share the stories of two special women.

Our first story (video) features Christy Robinson sharing her mom, Arlane’s story.  We hope in sharing her experience we can raise awareness of vasculitis and the need for earlier diagnosis.

The second woman we want to honor is Minna Katz. Her story came to the VF via her daughter, Judy, her siblings, Martha and David, and their mother’s physician, Duvuru Geetha, MBBS, MD, who is Co-Director of the Johns Hopkins Glomerular Disease Clinic. Minna had been Dr. Geetha’s oldest patient with vasculitis and had inspired everyone around her.

A Profile in Courage: Our Mom and Vasculitis

Friday, May 30, 2014. Judy’s cell phone rang at 5:00 pm. Jan, desperate, declared, “I am here at Mom and Dad’s—we’re supposed to be having dinner together. But Mom can’t breathe! I’ve begged her to let me take her to the ER but she won’t go. Can you say something to convince her otherwise?” Judy heard Minna in the background, declaring 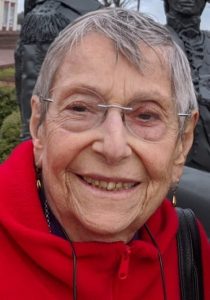 between gasps, “I’m not going tonight!” As a former nurse, Minna knew that the ER would be a madhouse on a Friday night.

By the next morning, hardly able to breathe, Jan rushed Minna to Sinai Hospital in Baltimore, Maryland. Thus began a journey that would continue until her passing from other causes six years later. During those first few days after hospital admission, Minna slid towards death, her lungs laboring, kidneys failing, and a diagnosis as yet unknown. Jan refused to give up hope, not accepting that Minna would be allowed to pass—just another elderly person destined to die of pneumonia and associated kidney failure.

With the family’s encouragement, Jan pressed Minna’s primary care provider to get the lung and kidney specialists together, insisting that they collaborate to figure out what was wrong. When they finally started comparing notes, and examining the blood work and test results, the physicians began to suspect that this was not a simple case of pneumonia.

By mid-week, the medical team came to a surprising conclusion. They diagnosed Minna with granulomatosis with polyangiitis (GPA), a rare form of vasculitis that usually presents in people in midlife. Minna was 88 at the time.

The medical team started massive doses of prednisone and set up Minna for four, once-weekly infusions of rituximab, a monoclonal antibody treatment for blood cancers that had proven effective in treating GPA. They ruled out performing a lung or kidney biopsy to confirm the diagnosis as being too invasive for a person of her age.

Throughout the summer, Minna’s recovery proceeded in fits and starts. She struggled with weakness, fatigue, a bout of cellulitis, side effects from the prednisone, and chronic issues related to vasculitis. The family had a growing awareness by the end of the summer that although she was officially in remission, vasculitis would be with Minna for the rest of her life.

Martha, the family’s consummate medical sleuth, went to work to find out everything she could about vasculitis. She discovered the Vasculitis Foundation (VF) website and learned the history of GPA, treatment options, and resources. Most important, the VF website led Martha to the Johns Hopkins Vasculitis Center, which everyone agreed would be the best possible solution to give Minna the care she needed for this serious disorder.

Almost two months to the day that she was rushed to the ER, Minna had her first appointment with Duvuru Geetha, MBBS, MD, Associate Professor of Medicine, Division of Nephrology, and Assistant Director of the vasculitis center. With her specialty in nephrology and renal disease from vasculitis, Dr. Geetha was the expert Minna needed to help steer her through this new landscape. They forged a bond over the next six years based on Dr. Geetha’s expertise and compassion, and Minna’s determination and positive attitude.

Over the course of the ensuing years there were major changes in Minna’s life. With her health now compromised by vasculitis and the possibility of a relapse, Minna and her husband, Lou, decided that the most sensible decision was to move to Roland Park Place, a continuing care community in Baltimore. Minna had quarterly appointments at the vasculitis center, and reveled in knowing that she was Dr. Geetha’s oldest patient. Dr. Geetha enjoyed Minna’s wit and curiosity, and found inspiration in Minna’s positive, forward-looking, indomitable attitude.

Although Minna never experienced a vasculitis relapse—rituximab held her in remission for the rest of her life—she continued to have vasculitis symptoms, including thinning itchy skin, dry mucus membranes, spontaneous bruising, fatigue, and slowly advancing kidney failure. However, Minna was determined to keep on living with a positive attitude and fierce enjoyment of life to the fullest extent possible.

Minna withstood Jan’s passing from mesothelioma in September 2018 and took care of Lou until he passed in April 2019. She persisted through the pandemic, but tragically experienced a non-survivable heart attack in late September. Before Minna died, Martha, Judy, brother David, and most of Minna’s grandchildren visited her in person. Minna was not in pain, and was aware of what had happened and what lay ahead.

To the end, Minna had a lively and curious mind, always wanting to see, learn, and understand the world around her. She viewed life as a great adventure and always looked to the future, though she also cherished the past. While vasculitis, the losses of recent years, and the pandemic were very challenging, Minna retained her sense of humor, and a forthright and clear view of life. Her obituary stated, “There will never be another like her; may her memory always be for a blessing.”

CELEBRATING THE SUPPORTIVE WOMEN IN OUR LIVES

“My mother!  During my diagnosis she was there for me and took care of me when I was bold for 3 months from my flare up.  She is the real hero.”

“Optimism is the fuel driving every fight I’ve been in.” Kamala Harris

“Ann Marie Niziolek is a woman with Vasculitis who greatly inspires me! Her Vasculitis has caused her to have many many inpatient hospital stays, at least three weekly infusions, the need for continual oxygen and more! She lives with and assists her aging parents, tutors children in their homes when she is able, and always always has a smile and kind helpful words of encouragement to anyone in need! Ann Marie continues to make a very positive impact on my life!”

“My neighbor and friend, Sammy; over the past 18 months, she has been my rock.”

“My mother.  She struggled with RA but did not complain and still took care of others.”

“I would say my rheumatologist, she’s been my Guardian Angel through this all, she’s always there, she’s always in touch, once she was in Japan and even so she was able to attend my call, Thank you Dr Beatriz Zazueta!”

“My mom—she has been my support system, my listening ear, my cheerleader throughout my Vasculitis journey.  So thankful!”

“Lotte is my physiotherapist.  She inspired me to strengthen my muscles and increase my health condition, she still makes the exercises very challenging, so no dull moment with her.  She pushes me to the maximum and beyond.  Beside that it’s great to have this woman beside me.”

“My Mum. She was diagnosed with ANCA vasculitis in December 2020.  She was undergoing treatment when she very sadly passed away in February 2021.  As unwell as she was, she was so positive throughout her hospital admissions and treatments. A truly amazing woman.”

“The older I get the more prominent my mother’s influence resonates with me.  She set the example of a woman of faith and conviction.  She was wise, not in book learning, but in living. She was talented and hard-working.  Grace Emily Meistrell will always be my hero!”

Thank You to the Following VAM 2021 Sponsors!

Your ticket for the: Women Who Inspire Us

Women Who Inspire Us