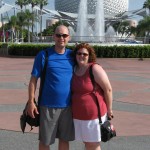 My name is Tina. Early 1996, I was diagnosed with what was believed to be Rheumatoid Arthritis. I suffered on and off with treatments for RA, including Cortisone shots so I was able to walk down the aisle for my August 1997 wedding to my high-school sweetheart, Doug. My new husband and I both caught colds on our honeymoon. While his cleared up, my did not. I was trying all sorts of remedies, but nothing helped. My “RA” was acting up even worse that it had ever been. I was at the point that just the simplest task was not so simple anymore. My doctor ordered numerous tests which showed I was anemic. I was also losing weight. It wasn’t until my nose collapsed right before Christmas 1997 that my doctors became stumped and worried at the same time. After several x-rays, a trip to an ENT and finally a biopsy did I get my diagnosis of WG in February 1998.

Since then I have suffered over the years just trying to find medical personnel familiar with WG and with several different treatments. Finally in August 2001 I became short of breath & it kept getting worse when I met with Dr. Robert Lebovics, for yet another opinion. My trachea was now involved and he performed three surgeries over a year & a half to “stretch” open my trachea. It’s was a long haul to finally achieve “remission”. I even had my “saddle-nose” reconstructed March 2005.  I have had a few minor flares since but have found success with Rituxan.
When I was first diagnosed, I was scared to death. I wasn’t sure I was going to live or have a normal life. While I might not be able to do some of the things I once did or wanted to do before WG, I try to look at what I’m still able to do and what I have. I have a wonderful husband, great family support, a good group of co-workers that help tremendously, a very supportive group of friends and the Vasculitis Foundation on my side.
Published: May 2012

Your ticket for the: Tina’s Story