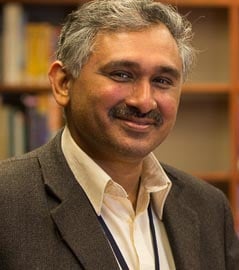 Summary:  In many diseases, our own body produces antibodies directed against our own tissues and organs (autoantibodies), a phenomenon called autoimmunity.  EGPA/Churg Strauss Syndrome is a serious rare ‘autoimmune’ condition that affects multiple organs, primarily lung, peripheral nerves, heart, gastrointestinal tract and skin.  Therefore, the disease can manifest as a combination of symptoms, ranging from asthma, rash, fever, gastrointestinal bleeding, numbness of hands and feet and joint pains.

The condition has no cure and the different symptoms are controlled by a combination of powerful anti-inflammatory and immunosuppressant drugs, with severe side effects.  Hence, there is a need to understand the underlying mechanisms of the disease to improve patient management and cure.  Autoantibodies against a type of white blood cells called neutrophils (usually associated with infections) which particularly target ‘myeloperoxidase’ (MPO), is seen in 40% of the EGPA patients presenting with severe respiratory (asthma) and heart complications.

However, the disease as obvious by its name is characterized by an increase of eosinophils in blood and airways.  The reason for this paradigm is not known.  Eosinophils are a different kind of white blood cells that exclusively release ‘eosinophil peroxidase’ (EPX), a similar compound to MPO.

In this study, we propose to determine the presence of antibodies against MPO, their relation to severity of the disease and a possible involvement of EPX in the underlying autoimmune mechanism.  This novel idea has therapeutic implications in that these autoantibodies may determine the severity of disease and allow us to better manage and treat these patients.

Educational and Professional Standing
After obtaining his medical degree (MBBS) from the University of Kerala in India in 1988, Dr. Nair trained in general and respiratory medicine at the University of Kerala Medical College Hospital in Trivandrum (with an MD for thesis on exercise-induced bronchoconstriction, Diploma in Tuberculosis, and National Board Certification in Respiratory Medicine (DNB), and Royal Sunderland and Royal Sussex County Hospitals in England (MRCP in General Medicine, 1996).  He joined the faculty of Health Sciences of McMaster University in 2004 after training in Health Research Methodology, a clinical research fellowship and a PhD under the supervision of Professors Frederick Hargreave and Paul O’Byrne.  He was elected a Member of the National Academy of Medical Sciences of India in 1993, Fellow of the College of Chest Physicians in 1999, Fellow of the Royal College of Physicians of London in 2003 and Fellow of the Royal College of Physicians of Canada in 2009 with certification in Internal Medicine and Respirology. In 2005, he was awarded the Ann Woolcock – American Thoracic Society prize for excellence in Asthma Research.

Research Interests
Dr. Nair’s research focuses on developing and applying non-invasive measurements of airway inflammation in the treatment of asthma and COPD, particularly in patients with difficult-to-control and prednisone-dependent asthma.  His laboratory characterizes the types of bronchitis in airway diseases using measurements in sputum, develops novel biomarkers in sputum, identifies mechanisms of bronchitis and explores novel targeted therapies of bronchitis.  He directs the AllerGen National Centre of Excellence Clinical Investigators Consortium for Severe Asthma and is a co-investigator of the Canadian Respiratory Research Network funded by CIHR.

Your ticket for the: Parameswaran Nair, MD, PhD, FRCP, FRCPC