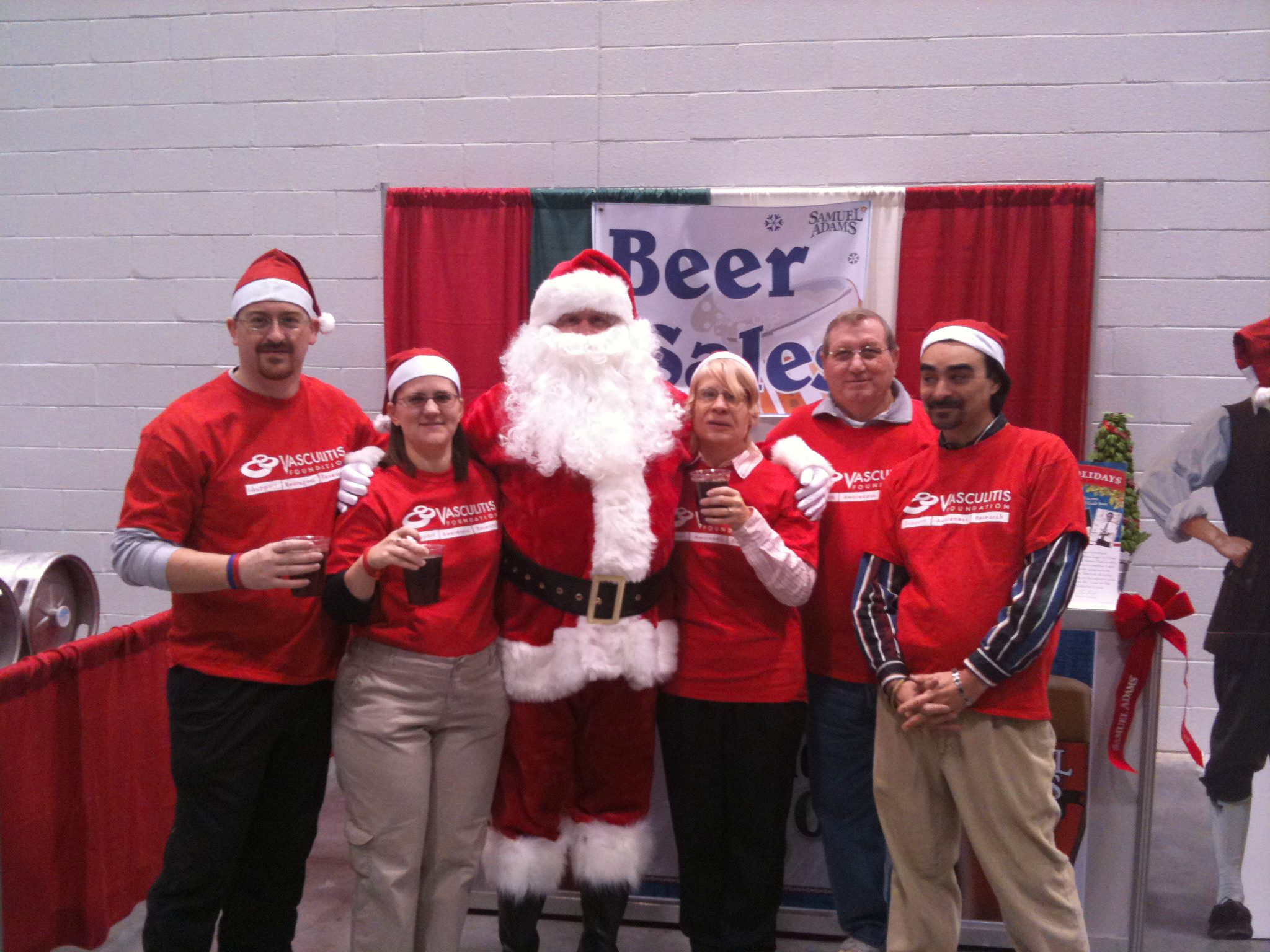 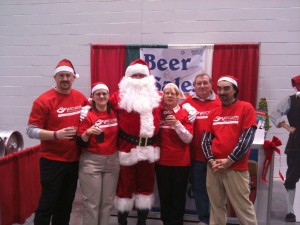 On Dec. 3-4, 2010, friends, family and members of the Hampton Roads VF Chapter, manned the beer sales table at the Surf-n-Santa 10 Miler race in Virginia Beach, Virgina. Over 5,000 runners dressed as Santa, elves and other holiday characters ran in the race. As one of the named charities for the race, the VF received all of the beer sales and were featured on the race’s website and in race materials.

Lynn and Greg Lesko, leaders of the Hampton Roads VF Chapter, organized the VF’s participation in the event in memory of their son, Mark, who died on March 8, 2009 at the age of 26. Erica, Mark’s widow, and his brother, Bryan and Bryan’s wife, Ashley, helped with the booth. Lynn and Greg shared the following about the weekend.

“It was a very exciting two days and hopefully we were successful in our efforts to raise awareness and a few dollars too. On Friday runners picked up their race packets and vendors exhibited race gear and health foods, etc. The exhibit hall was filled with people and there was so much energy and excitement filling the air. As folks passed by our table, some glanced and passed right by, while others stopped to chat. When we asked them if they had heard of vasculitis, they all said that they didn’t know about it until they registered for this race and  read the associated information in the race materials. With 4,500 online registered runners and the 500 who registered on Friday, we got the word out to quite a few people. We gave out many bracelets in exchange for a donation…although some picked them up without putting anything in the jar, but that’s ok….. they now have a VF bracelet.

Health care professionals who came by the table were very interested about vasculitis and asked many questions.  A nurse looked at Mark’s photo and asked if he had been treated at VCU (Virginia Commonwealth University) Medical Center. When we said that he had, she said, “I cared for him only once, but I will never forget him.” Mark was at VCU for 69 days in intensive care and was treated by dozens of nurses over that time. The nurse also told us that many of the VCU nurses remember Mark as a very special young man. We gave her about a dozen bracelets to take back to VCU.

During the race, the band and race announcer periodically mentioned the VF and asked those in attendance to support us. Greg was asked to speak and he talked about Mark and what vasculitis is and what we are trying to do for the VF.  Shortly after that, a woman came by and told us that her son has many of the same symptoms but doctors can’t find out what’s wrong. We suggested they find a rheumatologist and gave her a brochure.

Our last story is of a young woman whose closest friend’s baby was just released from the hospital on Friday night after being diagnosed with Kawasaki’s disease. We gave her our card and information and hope the family of this baby will contact us.

We raised some money and A LOT of awareness. If you would like to learn more about the event, please contact us.”