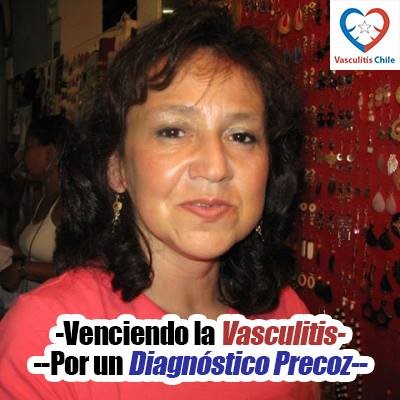 My name is Ximena Romo Quintana. I was born in Concepción, which is 500 kilometers south of Santiago, the capital of Chile, and where I have lived since 1988. I studied at the University of Concepción, Chile and am a Spanish-English translator.

I’ll never forgot what doctors told me when they diagnosed me with vasculitis, “It is not in our minds and that is what we have to change”.

Vasculitis is so rare, that doctors didn’t think of it as a possible diagnosis. In fact, most of the doctors will never see a patient with vasculitis during their careers.

So, I decided to make vasculitis famous.

One night, in the summer of 2010, while I was in my wheelchair looking for people with my disease in on the internet, I got in contact with my first friend with GPA Wegener’s. I knew about the Vasculitis Foundation and I was added to the support group.

I started working to raise awareness about my illness—Wegener’s—which at that time had changed its name to Granulomatosis with polyangiitis. In 2015, the Fundación Vasculitis Chile was legalized. Today we’re 1,155 members strong in our Facebook support group with members from many Spanish-speaking countries. Over 600 people are from Chile.

Fortunately, vasculitis is more known now, and so is the Fundación Vasculitis Chile. We have already created three chapters in other cities in Chile. The first one, of course, was created in my hometown, Concepción.

When I was first diagnosed, the disease was not known by the Ministry of Health, and therefore it was not included in our health system. Now they are going to develop Clinical Guidelines for vasculitis, something that was unthinkable when I started raising awareness here thanks to the Chilean Rheumatology Society, SOCHIRE, which took the initiative, since the Ministry of Heath didn’t take much interest in the disease.

Clinical guidelines will help us to have a code for vasculitis in the National System for medical benefits and to apply vasculitis to the different health care programs for the medication and medical care we require. In a meeting with Karla Rubilar, Deputy of the Health Commission at the Congress and Dr. Enrique Paris former Presidente of the Colegio Médico de Chile (Chilean Medical Association)

Our current campaign is called “Venciendo la Vasculitis con Diagnóstico Precoz,” Defeating Vasculitis with Early Diagnosis. It’s aimed to give primary health care doctors information to help them recognize the symptoms of the disease, so they could have a suspected diagnosis of vasculitis.

We have the hope the new Health Authorities, who will take office in March, will be more involved in the needs of rare diseases such as vasculitis and all the people can have access to the proper medical care.

Your ticket for the: Ximena Romo Quintana – Raising Awareness and Impacting the Health Care System in Chile through Fundación Vasculitis Chile