Some of Our Success Stories

Two winners tied for first place and another received an honorable mention in the Vasculitis Foundation’s 2019 Recognizing Excellence in Diagnostics (V-RED) award program. With more nominations than ever before, the program, now in its sixth year, has grown into a powerful campaign that raises awareness about early diagnosis.

The V-RED program calls on patients worldwide to nominate a medical professional they want to recognize for making a critical, early diagnosis of vasculitis—thus enabling timely treatment, and potentially sparing permanent and ongoing health complications.

Karen Hirsch, past-president of the VF Board of Directors, is particularly encouraged by the program’s success. After her son, Michael, received an early diagnosis of vasculitis, Hirsch created the award to bring special recognition to medical professionals in a broad range of clinical specialties. She believes the award increases awareness among medical peers.

“We have seen many times over that a colleague of one of the previous winners goes on to make a diagnosis themselves,” said Hirsch. “When we honor a medical professional with this award, it helps to spread awareness throughout the whole medical community. It puts the disease on the radar of colleagues, patients, and even specialty medical associations.”

The program has seen a two-fold increase in patient-submitted V-RED nominations since it started in 2014. That year, the VF received 40 nominations; this year, a record-breaking 92. And that is only one of this year’s firsts. Two winners were chosen to share top honors. The VF also recognized a doctor in Australia—the first time an international physician was chosen.

The three winning medical professionals are personally presented with the award by the patient who nominated them. All of the other nominated physicians will be given a special certificate of appreciation from the VF.

Nancy Anderson’s experience with trying to get a diagnosis began in a way that is familiar to many vasculitis patients. However, it is a remarkable, ironic twist that makes her story stand apart.

Nancy’s early, nonspecific symptoms led to multiple visits with specialists who misdiagnosed the underlying condition. As her condition worsened, one doctor, in particular, was determined to get some answers—her husband, Mark Anderson, MD, who is board-certified in internal medicine and anesthesia. 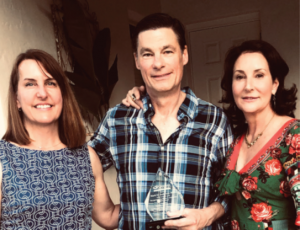 “When Nancy’s peripheral neuropathy (numbness and tingling) spread from her feet to her hands, I knew this was something very serious,” said Mark. “I also knew her doctors were missing the core issue when they suggested it was just arthritis or fatigue.”

Fortunately, he had some knowledge of vasculitis from treating patients with giant cell arteritis (GCA), so he knew what lab tests needed to be ordered for Nancy. When her ANCA test came back significantly elevated, they immediately contacted John Stone, MD, a vasculitis specialist at Massachusetts General Hospital, Boston, where Nancy was diagnosed with microscopic polyangiitis and treated with rituximab (Rituxan®).

“I feel so fortunate that my husband intervened when all of my other doctors were misdiagnosing, or not taking my condition seriously,” said Nancy. “His research and gut instinct ultimately prevented the vasculitis from becoming worse.”

If you are a patient, searching Google for disease symptoms can be a misleading and scary prospect. Your doctor might even give you a stern lecture about not using the internet to self-diagnose.

However, in Meaghan Carpenter’s case, she’s thankful her doctor used Google to find clues that eventually led to her diagnosis of vasculitis. 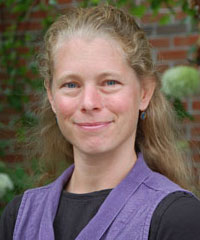 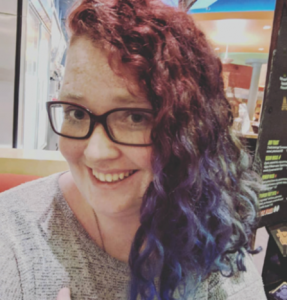 In March 2008, during her freshman year in high school, Carpenter began exhibiting peripheral neuropathy in her legs, in addition to chronic asthma and allergy issues that didn’t appear to have any common thread. Eventually, Carpenter’s pain grew worse, and she was admitted to the pediatric ward at Presbyterian Hospital in Albuquerque, New Mexico. Doctors controlled her pain with morphine, but they were unable to “connect the dots” to pinpoint the diagnosis.

Fortunately, Gwendolyn (Lattimore) Shelton, MD, was a hospitalist on her medical team who felt Carpenter’s case needed more in-depth investigation. When none of the potential diagnoses in the hospital’s computer produced any leads, she searched Google for clues with more success. A website suggested Churg-Strauss syndrome, now called eosinophilic granulomatosis with polyangiitis.

Dr. Shelton contacted one of her former residency supervisors (Wilmer Sibbitt, MD, who later became Carpenter’s first rheumatologist) for advice, and he agreed with her conclusions. With her diagnosis, the doctors at Presbyterian Hospital were able to begin treatment early enough to prevent her vasculitis from progressing and causing more systemic damage.

“Dr. Shelton looked outside the box, took my case home with her, and saved me years of potential misdiagnosis,” said Carpenter. “Thanks to her investigation, my disease was identified and brought under control. I’ve been able to live an almost normal life. I’ll never forget what she did for me.”

Carmen Haule Reaiche is enjoying life in remission. She has returned to teaching full time and is happily
raising her 15-year-old daughter, Celina. However, she remembers when a series of strokes, at age 42,
threatened to derail her life forever. Reaiche credits her comeback to Andrew Lee, MD, a neurologist in
Kent Town, South Australia.

Her first stroke occurred in 2012. When she awoke, Reaiche was unable to speak or walk. She was examined by specialists at a local hospital, St. Andrew’s, Adelaide, who treated her for stroke. After a few days, she was released from the hospital. Unfortunately, several smaller strokes followed, and her doctors had no idea why they were happening with such frequency, or to someone who usually would not be at risk. 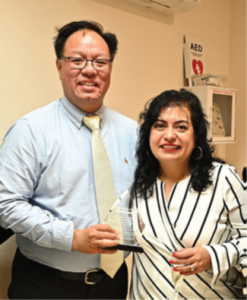 Reaiche was referred by a friend to Dr. Lee. Reaiche said Lee was as perplexed as the other doctors about the underlying reason, but there was one difference that set him apart from the other specialists. “He never accepted the idea that I would simply have to live in this condition,” said Reaiche.

“Dr. Lee followed his gut feelings, and he ordered a series of tests that finally produced a diagnosis of cerebral vasculitis.” Reaiche is now enjoying a life free from harsh medications and debilitating symptoms.

“Early diagnosis made a difference to my life in many ways,” said Reaiche. “It allowed me to grow stronger and to recover. I am back to work, and even though I am not at 100 percent, I am alive. I am also able to be here for my only daughter when she has needed me the most, as she lost her father to cancer. I am functioning the best I can.”