This Guy Could Die from A Golf Course High Five 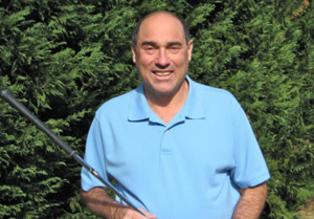 It was mid-March and Bob Geismar sensed that this might be his last golf round for a while. A marshal had tipped him off that the course was operating on a day-to-day basis, expecting to be shut down by Florida’s government at any moment.

“My lungs are imperfect,” Geismar said. “Because of my auto-immune issue, I can’t get this virus. I really can’t.”  Geismar played in a twosome that became a threesome after his 19th hole when a walker, a friend of Geismar’s we’ll call Joe (not his real name), joined the group. They were at Geismar’s regular course, Delray Beach Golf Club, a city-owned Donald Ross design that opened in 1926. Geismar had 200 yards left for his approach to the final green. He hit a 4-wood, a beautiful shot that sizzled past the flagstick and finished 20 feet past the cup. “What a shot!” exclaimed Joe. Geismar slid the wood back in his bag and was about to climb into his cart when he looked up and saw Joe making a beeline for him.

“This guy comes flying at me,” Geismar said. “I started yelling, Joe! Joe! Get away from me! What are you doing?” Old habits die hard. Joe intended to high-five Geismar or give him a hug or something to share a moment of celebration after the shot. Golf is a social game but now it has a new kind of distance problem—social distancing.  “Joe had lunch in the clubhouse and I could tell he’d had some drinks,” Geismar said. “I don’t know where he’s been. So I jumped back in the cart and said, Get away!” Just in time, Joe finally remembered why Geismar was shouting. The pandemic? Social distancing? Ohh, right. They avoided physical contact.

But Joe jumped on the back of the cart, anyway, to hitch a ride to the green. “I couldn’t stop him,” Geismar said. “The wind was blowing into my face as we went toward the green, though, so it was OK.” The incident made Geismar wonder, When it’s safe for golf to resume, will it be safe for him to resume golf? He knows to keep his distance but will playing partners be as careful? Or will they forget in the heat of the moment, as Joe did? A risk-reward hole has a new meaning for us.

It’s not just golf that is potentially hazardous to our health, it’s all contact with other humans. Geismar and his wife, Debbie, have hunkered down in their Boca Raton home for the past six weeks. She goes out only for groceries and doesn’t stay long because she’s fearful of bringing the virus home. The shutdown has been tough on Geismar. He loves golf. And he’s sure the feeling is mutual. He owns a registered trademark for “Golf Loves Me,” although he hasn’t decided what to do with it. Merchandise? A book title? Geismar is a golf fanatic. He plays the game, watches it on television and revels in its history. He can name all eight three-time Masters champions, for instance. Just ask him. He dabbles as a licensed insurance agent but his favorite gig was hosting “The 10th Frame,” a nationally syndicated bowling show on TV in the 1990s. He misses those days.

“You know what they say,” Geismar said wistfully, “old broadcasters always want to be on the air.” In lieu of that, Geismar would settle for being on a golf course again. He went through too much adversity to lose the game he loves a second time. A second time? In 2005, Geismar became very ill. Eating was difficult. So was breathing. There were kidney issues, too, but he had no apparent kidney disease. He spent two weeks in an intensive care unit at the West Boca Medical Center. Specialist after specialist came and went without being able to explain how an otherwise healthy 52-year-old man was suddenly dying.

Geismar’s mystery illness reduced circulation to parts of his body, mostly his feet and legs. He lost 30 pounds, his weight dropped to 110. His left hand grew weak. Luckily, one nephrologist (kidney-disease doctor) wouldn’t let the mystery go. That doctor left Geismar’s room one evening and dived into a pile of medical textbooks instead of going home. Hours later, he burst into Geismar’s room and announced, “I think I figured it out.” A biopsy confirmed his findings. Geismar had Churg-Strauss Syndrome, a form of vasculitis that hits fewer than 500 patients a year in the U.S. Simply identifying the illness wasn’t good enough, however. Despite a new regimen of medicines, Geismar’s feet and legs still didn’t work great and his left hand lost more feeling until his fingers became paralyzed. He visited more doctors. One day in a specialist’s office, Geismar asked The Big Question. The answer wasn’t good. No, the physician told him, you will never play golf again.

“When the second doctor said that in such a harsh, condescending, next-patient-please way, I started crying in his office,” Geismar remembered. “I cried paying my co-pay, I cried in the elevator, I cried on the way home and tucked myself into bed, literally in a fetal position. I’d never felt such depression in my life.” His daughter, Amy, came home from school that day and began bawling when she saw him. She was upset because she’d never witnessed her father so defeated.

Geismar loves golf, golf loves him. It seemed unfair that he’d been suddenly robbed of something precious. Worse, he felt damaged. But Amy’s reaction snapped him out of his short-lived pity party and rekindled his steely, determined inner golfer. Yes, he decided, spurred on by his daughter’s tears, he’d keep fighting. The next day, Geismar searched the internet and found a Dallas woman who was a Vasculitis Foundation board member. He cold-called her on a Friday morning. He didn’t expect what happened next. The woman—Rhonda (not her real name)—spent four hours on the phone reassuring this total stranger. She told Geismar that her own daughter, then 8, had Churg-Strauss and had nearly died on several occasions. I’m worried about golf and she’s worried about keeping her daughter alive, Geismar thought. It was a dose of perspective that got his full attention.

“At least somebody else knew how I felt,” Geismar said. “She told me, ‘I can’t promise you’ll play golf again but I’ll be here for you. There’s hope.’ She was a light at the end of a tunnel to me. She got me through this.” Her support was wonderful but it took a kind of Hail-Mary pass to turn around Geismar’s failing health. His wife asked one of Geismar’s specialists if he could recommend a Churg-Strauss Syndrome expert. What are the odds that this doctor’s patients happened to include a Florida woman whose son was Dr. Gary S. Hoffman, the Tiger Woods of the Churg-Strauss world? Geismar landed an appointment and flew to see him at Ohio’s Cleveland Clinic.

Hoffman examined Geismar in his office for only a minutes before two days of testing were to begin. Hoffman removed his glasses and pushed his face close to Geismar’s. “Your doctors saved your life,” Hoffman told him. “You were going to die from this. Now it’s my job to correct some mistakes they were making and treat you as perfectly as I can.” Hoffman used the ensuing test results to determine a much different formula of medicines for Geismar. They were game-changers and he soon felt better and began to regain strength. His left hand didn’t respond, however. Physical therapy didn’t help but he tried occupational therapy, which focuses on the area from the fingertips to the shoulder. On his first visit, the therapist asked him to put his fingers in a bowl of white rice and tell her what was happening. “I can feel the rice,” he said. “Excellent,” she replied. “Now go home and do that all day long, make your fingers tingle in a bowl of rice.” The rice bowl was just the start. Months of hard work, other painful exercises and tedious repetitions followed.

Geismar added a motivational tool, a 7-iron he kept in the family room. “Every day, I’d grab it and every day it would fall on the floor, clunk!” Geismar said. “I told myself that one day I was going to grab that sucker and hold it. One day, I finally did.” It took months but the light in the tunnel slowly got bright enough that Geismar added a new goal. He set a date to play golf—April 16, 2007, about 16 months after his previous round. On that April day, Geismar and his son, Dan, went to his favorite municipal track in Delray Beach. He’d been swinging a club but hadn’t struck a golf ball because he’d decided, by golly, he wasn’t going to hit a ball until he was on a real golf course again. There were doubts. He asked when he checked in at the golf shop if he could get his money back if he was unable to play. Of course, he was told. The first tee was the moment of truth. Geismar pegged a ball in the ground and tried to ignore the fear that he’d whiff, that he was about to fail and golf was out of his life forever. Finally, he swung. He hit a drive 200 yards down the fairway. It was a minor miracle but it wasn’t minor to Geismar.

“My son looked at me and we didn’t say a word,” Geismar said. “We couldn’t.” Geismar shot a newspaper 85 that day. He didn’t try to play out of three bunkers because his legs were still weak. “It was the greatest round of my life,” Geismar said. “Not because of the score but because I could play golf again.” Now, a different illness—coronavirus—threatens to take golf away from him again. Geismar has no plans to quit this time, either.

During the low points of his health ordeal, Geismar recalled how he woke up every morning, put his feet on the floor and thanked God for another day. During the pandemic, he has resumed the ritual. “Some things we think are important aren’t important at all,” he said. “All that matters is, you’re alive. If you’re alive, you have a chance.”

Golf isn’t important. Geismar knows that. But he loves golf, golf loves him. He’s still here, so he has a chance.

Your ticket for the: This Guy Could Die from A Golf Course High Five

This Guy Could Die from A Golf Course High Five