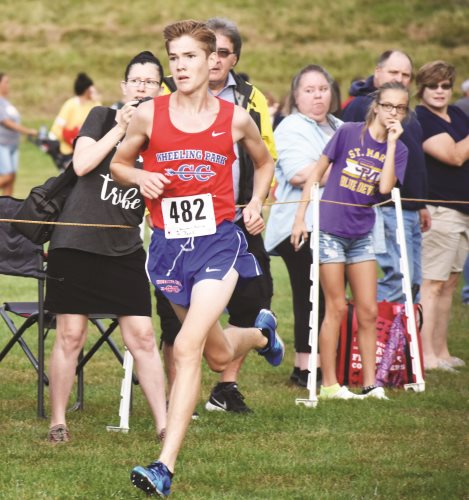 For our final Vasculitis Foundation Patient Profile of 2018, I had the pleasure of sitting down with Ronnie Saunders, a senior at Wheeling Park High School in Wheeling, West Virginia.

Like many of the other young vasculitis patients I’ve met over the past two years working with the Vasculitis Foundation, Ronnie’s path to diagnosis included a litany of painful symptoms like rashes, fever, and strep throat.

Unlike just about all of those patients, Ronnie has a unique trait: his ability to run incredibly fast.

As a sophomore in the fall of 2016, Ronnie burst on to the West Virginia cross-country running scene with a 3rd place finish at the state track meet.

Going into his junior year, Ronnie felt he was ready to take the next step in his running endeavors. But that summer, the symptoms struck. After traveling to Children’s Hospital in Pittsburgh in July 2017, Ronnie was diagnosed with GPA/Wegener’s.

“I just love to run,” Ronnie says. “I started training as soon as the doctors allowed it. Physically, I felt terrible when I started running again; but mentally, it felt amazing to be back.”

Ronnie’s path to recovery was not immediate. Multiple GPA/Wegener’s flare-ups last winter forced him to undergo rounds of Rituximab and Cytoxan treatments, along with high doses of prednisone. By the time he had to endure a second bronchoscopy, a track and field race was only days away.

Although he wasn’t close to feeling 100 percent and didn’t automatically qualify for the state meet, Ronnie received an at-large berth to compete in the following week’s race. There, he made a remarkable turnaround, taking second in the 3200 meters (2-mile) run with a time of 9:38, just a half second behind the winner.

Among those who looked on in awe was his coach, Jacob Galik, who says he had never seen anyone overcome that type of adversity in the middle of a season.

“There were 100 different times where I wouldn’t have had the perseverance he showed,” Galik says.

“I’ve never been prouder of him than what he did last year. We’re a good team, and it’s largely because the rest of the guys look up to Ronnie and see him as an inspiration.”

As his recovery process began, Ronnie’s mom, Lori McLaughlin, started researching the disease online. That’s where she came across both the Vasculitis Foundation and Brandon Hudgins, a world-class runner who leads the Victory over Vasculitis Campaign.

“I’ve really leaned on the Vasculitis Foundation for support,” Lori says. “I wanted Ronnie to have someone to lean on as he gets ready to go off to college and enter the real world.”

While he eventually wants to become an engineer, Ronnie has some immediate goals he’s paying more attention to. “I would love to run in college and be an All-American at least once. I’d also like to qualify for the Olympic trials.”

With all the accolades Ronnie has racked up, it’s his performances off the track that his dad, Walt, is the proudest.

“The biggest thing I’ve seen is his responsibility level. It’s been off the charts for going through the things that he’s faced as a 16- and 17-year-old.”

Luckily, Ronnie is back to full health and in remission. As he begins his senior year, we are all rooting him on and hope that he can take his goals the distance.

Your ticket for the: Ronnie Saunders – Student Athlete Inspired to Excel by the Vasculitis Foundation’s Victory Over Vasculitis Campaign