Positive Outlook Keeps Her Afloat in Journey with Behcet’s Disease 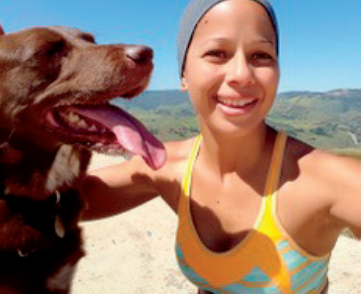 If Sarah Hewawitharana could be any other creature on this planet, there’s no question what it would be. The name she chose for her email address says it all: [email protected]

“I like it because it reminds me not to take life too seriously. I’ve always been obsessed with the water, the ocean and fish,” says Sarah, who’s been swimming since she was 4—much of the time upstream, due to her long journey with Behcet’s disease.

At 39, Sarah’s light-heartedness reflects her resiliency in the face of a rare chronic disease that has left her with a brain injury, blindness, and at times, feelings of isolation.

Sarah’s life journey has taken her around the world—from her London birthplace, to Sri Lanka where she grew up, to Scotland where she earned her bachelor’s degree in Cardiovascular Pharmacology and Neuroscience at the University of Edinburgh in 2002. She’s worked as a rescue diver in the Greek Islands and South Africa, and has lived in Australia, San Francisco, and now San Luis Obispo, Calif.

Sarah’s journey to a diagnosis, however, has been long and frustrating. She wasn’t diagnosed with Behcet’s until she was 32, but believes she had symptoms since she was a baby, especially severe mucosal ulcers throughout childhood and through her late 20s.

At age 31, while in Perth, Australia, she developed a severe “right-sided headache” with increasingly debilitating symptoms that landed her in the ER. An infectious disease specialist ordered an MRI that revealed a 5-inch blood clot in her brain. It took 6 months and further life-threatening complications, before the specialist was finally able to diagnose Sarah with Behcet’s—Non-Parenchymal Neuro- Behcet’s to be exact—and send her to a rheumatologist. She was in and out of the hospital for another year as other blood clots and complications developed.

“Overall I guess it took 32 years to get my diagnosis, as so many of my symptoms were dismissed before,” she says. “It’s very frustrating to know that if I had been diagnosed sooner, I would maybe have managed to avoid the blood clots in my brain and losing my eyesight.”

Today, Sarah takes medications including azathioprine and a blood thinner. However, the disease is still progressing, and doctors are monitoring a recently discovered aneurysm in her right carotid artery.

On the bright side, Sarah is glad to be working full-time again as a 911 fire dispatcher in San Luis Obispo. The former amateur underwater hockey competitor is also working out again regularly. Although she can no longer play underwater hockey due to her brain injury, she has continued to participate as a referee, and represented the USA at a world championship in Spain in 2015.

And yes, she’s still swimming. “I believe being so physically fit before my hospital admission is what saved my life,” she says.

Your ticket for the: Positive Outlook Keeps Her Afloat in Journey with Behcet’s Disease

Positive Outlook Keeps Her Afloat in Journey with Behcet’s Disease