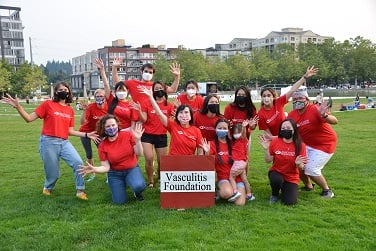 In light of the symptoms and treatment options, a diagnosis of vasculitis can actually be a positive, life-changing experience for some patients. After 26-year-old Jessica Kent was diagnosed with polyarteritis nodosa (PAN) in 2015, she discovered a passion for working in healthcare and a greater appreciation of life. She learned to appreciate the little things such as going out with friends, traveling, and attending school. She also felt fortunate to have amazing support from her family, friends and care teams. To pay it forward, Jessica has been organizing flash mob dances to raise awareness of vasculitis and draw attention to the disease.

PAN is a form of vasculitis affecting medium-sized blood vessels that supply the skin, nervous system, joints, kidneys, gastrointestinal tract, and heart, among other organs. Depending on the form of the disease, PAN may only affect the skin, a single body organ, or multiple organ systems. When Jessica was finally diagnosed with PAN it took many years for her to receive a diagnosis. “When I was younger, I had painful lesions that were growing on my legs over the years, which at some point spread to my stomach,” she explained. “But being an otherwise healthy young adult, many doctors overlooked the symptoms, didn’t recognize the vasculitic rash and dismissed the fact that something could be wrong.”

From Jessica’s perspective, she feels there’s a misconception that if you’re young, you must be healthy, and if you’re a student, your symptoms must be related to stress. “Through my journey, I saw more than 14 doctors over multiple years before I was correctly diagnosed with PAN,” Jessica noted. “As vasculitis patients, I hope more of us can be advocates [for each other] to bring greater education of the disease to the medical community, allowing for earlier diagnosis and appropriate treatment.”

Jessica has organized two flash mob dances so far. The first was held August 14, 2021, at downtown Bellevue Park in Washington, and the second was August 20 at UVillage Shopping Center in Seattle. There has been a total of 32 dancers—15 in the first flash mob and 17 in the second, which doesn’t include many others who helped make these dances possible such as choreographers, photographers, videographers, a music editor, etc.

“Since vasculitis is not often in the spotlight as far as diseases go, the symptoms are not often recognized by clinicians and it’s generally unheard of in the community,” Jessica said. She wanted to call attention to what she considered a lesser-known disease and send the message out that vasculitis can affect those of all ages. Through the funds she is raising from these events, Jessica’s hope is that it will be put toward educating clinicians and the general public about vasculitis. “As with every disease, it’s key to have continual research and clinician understanding to best support patients,” she said.

Jessica’s flash mob dances have received a wonderful reception. “Not only did the flash dances raise awareness among the people watching, but friends and family members of the dancers also became more aware of the disease and have helped support the cause,” she said. “Together, our group has raised $6,709 in one month for the Vasculitis Foundation.”

A graduate student at Rice University, Jessica is finishing up her last year in the Master of Business Administration program with a focus in healthcare and entrepreneurship. After graduation she would like to use her degree to help increase the quality and accessibility of healthcare for all patients so they can enjoy enriched, independent and fulfilled lives. Her involvement in the medical community has also inspired her to one day attend medical school.

“The VF has a special place in my heart,” Jessica added. “It was through the VF’s recommendation that I met my amazing rheumatologist, Dr. Cornelia Weyand.”  Currently, Jessica is in remission and does not need treatment.

The MobileCause flash mob dance page can be found at: https://app.mobilecause.com/form/Jg7sGQ?vid=q5cun.

Your ticket for the: PAN Patient Raises Vasculitis Awareness Through Flash Mob Dances in Washington State