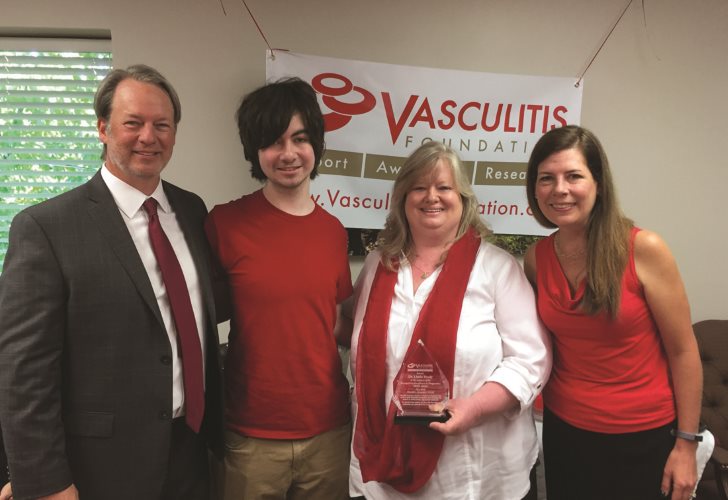 Dr. Brady was nominated by Lisa Crabb, the mother of Chip, who was diagnosed with Granulomatosis with polyangiitis (GPA/ formerly Wegener’s) in September 2017.

Throughout the summer of 2017, Chip’s condition worsened from what at first appeared to be a persistent cold, to something much more complex and serious. He suffered intense fatigue, hearing loss, and breathing difficulty.

Tests showed a dramatically elevated sedimentation rate indicating inflammation, and dark spots on his lungs which at one point suggested a relatively rare condition Histoplasmosis, or “Black Bird Disease”. However, an ultrasound ruled out that illness and confirmed another rare disease— Granulomatosis with polyangiitis.

Chip was treated with seven rounds of Rituxan®, and high doses of prednisone.

In April 2018, Crabb received the news that Chip was in remission.

She believes the positive outcome was largely the result of Dr. Brady’s persistence and professionalism. “

“Dr. Brady knew she had to dig deeper when Chip didn’t respond to the courses of antibiotics, and other unexplainable symptoms which occurred,” said Crabb. “She consulted other specialists and ordered further testing to get answers. That tenacity is what eventually helped us get a diagnosis.”

Dr. Brady said it is critical to push for more answers when presented with a patient like Chip, and to involve a team of specialists to get those answers.

“I strongly believe in using all my resources to make it a team approach. I am thankful to have access and working relationships with specialists (ear, nose and throat, pulmonary, rheumatology and nephrology) at Vanderbilt Children’s Hospital.”

Crabb thanks the VF for raising awareness with this special campaign.

“By awarding Dr. Brady the V-RED award, we are shining a spotlight on those who see the disease at its earliest stages – the primary care clinical community,” says Crabb.

“It is here where we need to make doctors aware of what vasculitis symptoms look like and when to push forward with additional testing when their instincts tell them there is something seriously wrong. By educating and recognizing doctors like Dr. Brady with this much-deserved accolade, earlier diagnosis and better long-term outcomes can be obtained by all those affected.”

The Vasculitis Foundation is also pleased to recognize these physicians for Honorable Mentions:

Ohio State Wexner Medical Center – Nephrology Columbus, Ohio Dr. Parikh was nominated by Sandy Nye, who was diagnosed with Microscopic polyangiitis in 2014 after being sick for more than five years with no definitive diagnosis. Dr. Parikh, a nephrologist, made the diagnosis in four weeks after performing a kidney biopsy and recognizing the symptoms of vasculitis.

Park Nicollet St. Louis Park Clinic St. Louis Park, Minnesota Dr. Watson was nominated by Nicole Shankey in recognition of his diagnosis of Granulomatosis with polyangiitis (GPA/ formerly Wegener’s) after an emergency room visit. Dr. Watson, an otolaryngologist, suspected the rare autoimmune disease after seeing Nicole during the ER visit. He recommended a course of high-dose steroids instead of an emergency tracheotomy.