Living with Kawasaki Disease Brings Out Strength, Hope and Resilience 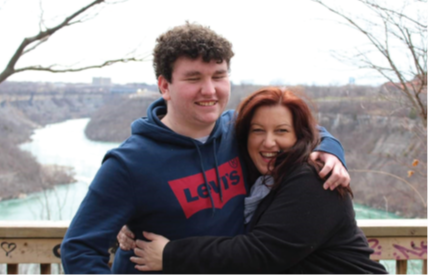 For Nicol Jackson, one particular incident stands out as a stark reminder of how rarely some doctors ever see a patient with vasculitis. Her 5-year-old son, Josh, who was being treated for Kawasaki disease, experienced severe chest pains. Nicol and her husband, Rob, rushed him to the emergency room at a hospital in London, Ontario, Canada, to be seen by their cardiologist.

“When we arrived at London Health Sciences Centre, we were swarmed by more than 20 nurses, doctors, and interns. All of them wanted to see ‘the child with Kawasaki disease.’ That made us realize we were dealing with a very rare condition,” recalled Nicol Jackson.

Josh’s first symptoms appeared as high fever, swollen, sore joints, bloodshot eyes, and peeling lips. Initially, Josh was treated for an ear infection, but it soon became apparent that something much more serious was happening. It was during Josh’s 5th birthday party they realized his condition was worsening, so he was taken back to their doctor, who on closer evaluation suspected Kawasaki disease. The visit was followed by an exam with a pediatrician who then confirmed the diagnosis.

Josh began treatment with intravenous immunoglobulin (IVIG), but he experienced a life-threatening allergic reaction. “As I watched the doctor and nurse try to revive my 5-year-old son’s limp body, I decided I would learn as much as I could about Kawasaki disease, and to make sure everyone I knew, and those I didn’t know, were educated about this disease,” said Jackson.

Months of treatment with prednisone and immunosuppressants left Josh susceptible to chronic infections, or bouts of pneumonia, making his ability to live a normal life virtually impossible. Over the last 14 years, he has lived with chronic pain and rashes common with Kawasaki disease.

Since the disease affects the large arteries in the heart, a full cardio check-up is necessary every six months. However, Jackson said that Josh is resilient, and has a stoic mindset about his condition.

“When I look at Josh, I see his pain, but I also see a strong young man who has made good out of an illness,” said Jackson. “Kawasaki disease does not define Josh. But it sure has made one thing true—he is our hero.”

Nicol Jackson is the founder and creator of a Facebook group called the Kawasaki Disease Support Group, which
she moderates with her daughter, Maddy. The group has attracted more than 6,700 members. To request membership into the group, visit https://bit.ly/2M7mros.

Your ticket for the: Living with Kawasaki Disease Brings Out Strength, Hope and Resilience

Living with Kawasaki Disease Brings Out Strength, Hope and Resilience