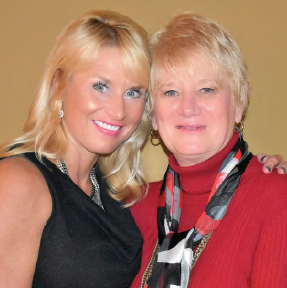 Kris with her mother, Sherry. Their book, Maze of Thorns, drew details from a journal that Sherry kept during Kris’ stay in the hospital.

However, her journey took an abrupt and unexpected detour with the onset of Central nervous system (CNS) vasculitis. The long-lasting impact of the illness left her having to relearn how to walk, talk, and do the most basic cognitive tasks. Her journey is chronicled in a book, “Maze of Thorns” written by Kris and her mother, Sherry Shuss.

The book details Kris’ frightening account of the early manifestation of CNS vasculitis. In addition to headaches and extreme fatigue, Kris suddenly found herself unable to comprehend sentences, or simple instructions. Her parents knew something was clearly wrong when Kris became confused, unfocused, and withdrawn.

“Although we didn’t know exactly what happened, we knew something serious was affecting Kris,” said Sherry. “Her condition grew worse and eventually led to many visits to the ER, and the psych unit for evaluation. The experts were totally in the dark as to what was happening to her.”

Eventually Kris, a brain biopsy and the results came back from Mayo Clinic with a diagnosis of CNS vasculitis. David Ridley, MD a rheumatologist from St. Paul Rheumatology in St. Paul, Minnesota who Kris’s family had been trying to see, arrived and came up with an action plan. Unfortunately, the long-lasting impact of the disease left Kris in a catatonic state where she couldn’t communicate or recognize anyone.

Maze of Thorns” is aptly titled because her journey back was full of setbacks and dead-ends. Prednisone and Cytoxan helped bring Kris’ CNS vasculitis under control, but her family and medical team feared the diagnosis came too late as the vasculitis had already taken hold of Kris’ internal organs causing her heart to stop more than once.

As miracles happen, Kris rallied. Her greatest challenge was regaining her physical and emotional health.

“Everything I knew and everything I was as a person was mostly erased,” said Kris. “I had to use math flash cards to learn simple arithmetic. I had to be taught how to read. I also took piano and French lessons to help my brain relearn. I retreated socially as my twenty-something friends were all enjoying the prime of their lives. I had gone backwards and had to start over.”

Also erased was Kris’ memory spanning nearly the entire summer of 1997. Fortunately, those long months were not “lost” because during that time Sherry kept a detailed, day-by-day journal of her daughter’s challenging recovery.

A few years ago, Kris and Sherry decided to take the notes and journal entries and turn them into a book they hope will help others going through a similar experience. After two years working together, the mother and daughter published “Maze of Thorns”.

“We never wrote this book to win a literary prize, or make lots of money,” says Kris. “We just felt my story could be a road map to help others who go through a serious health crisis. The book ultimately shows that you can get through the worst experience and come out on the other side with valuable life lessons.”

Maze of Thorns is available on Amazon.com at https://www.amazon.com/Maze-Thorns-Kris-Kelbrants/dp/0692762043

Your ticket for the: Kris Kelbrants – Documenting CNS Vasculitis Journey In New Book, Maze of Thorns