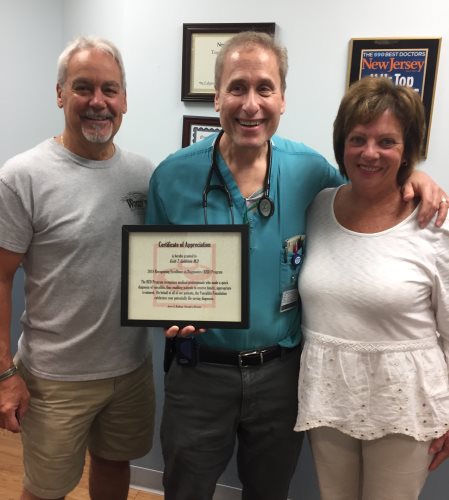 What Dr. Goldstein discovered when examining Maureen was alarming. “He found me to be lacking a right radial pulse and left arm blood pressure, carotid and subclavian bruits, and abnormal blood work,” Maureen shared. “He discussed at length the characteristics of large vessel vasculitis and its treatment options.”

Dr. Goldstein referred Howard to Johns Hopkins Vasculitis Center, where she enrolled in their Translational Takayasu’s Arteritis Study and began treatment for vasculitis.

Today, Maureen says she is on Humira and Cellcept with the status of “inactive disease” confirmed by a PET scan.

Maureen nominated Dr. Goldstein for the VF’s V-RED Award because he was crucial in getting her a Takayasu’s diagnosis, and helping her begin treatment.

“It is extremely important to reward physicians who are instrumental in identifying and successfully treating vasculitis and to share who they are and how they were successful in the process with others,” Maureen said.

She continues to see Dr. Goldstein to help manage her Takayasu’s symptoms and is grateful for his level of care.

“I am so lucky to have found such a caring, brilliant, knowledgeable physician who answers my texts, tells me no concern of mine is silly, empowers me to be active in the treatment of my disease and is not intimidated by other members of my health care team,” Maureen said. “I know I wouldn’t be here today to submit this application if it weren’t for Dr. Goldstein.”