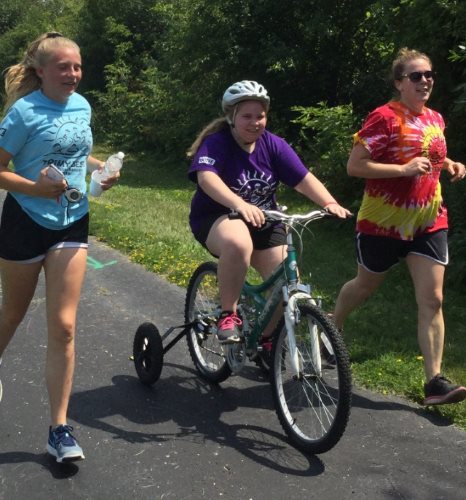 Diagnosed with Takayasu arteritis in March 2016 and faced with enormous obstacles on her road to recovery, Katrina Bargender, a high school senior from Racine, Wisconsin, attended the 2017 International Vasculitis Symposium in Chicago, which was the turning point in her vasculitis battle.

Meeting VF pioneers like Brandon Hudgins and Kate Tierney, among many other young adults, served as great inspiration for Katrina, and she has stayed in touch with them ever since.

“It was such a blessing to find other people who understood what I was going through,” she said. “I was able to relate so much to Brandon and Kate, and I’m definitely able to find a positive side to things now, no matter what.”

After several trips to the National Institutes of Health in Maryland for consultation, her Takayasu arteritis is now in its “quiet” phase. And while weekly methotrexate infusions are still required, she is now able to be much more active than in the past, an ability that came in handy this summer.

Last December, Katrina’s physical therapist told her about a nearby triathlon for kids with disabilities that would be held the following summer and Katrina set a goal to compete.

After working hard to build up her stamina, she dedicated two months leading up to the race to train, which included learning how to swim. The August triathlon included a 200-meter swim, 2-mile bike, and 1-mile walk.

It was no sweat for Katrina, who finished in 1 hour, 20 minutes. “I haven’t felt that much pain in a long time, but it was all worth it,” Katrina remembers.

In a nod to Brandon, an elite distance runner, she sprinted across the finish line as family and friends cheered her on.

Even though she is limited to homebound instruction from tutors at Racine Case High School, Katrina hasn’t used her difficult circumstances or the fact she must teach most of the course work to herself, as an excuse, and is on track to graduate at the end of the year as a result.

Her goal is to become a doctor, an occupation that piqued her interest while learning about the treatments for Takayasu arteritis, her own disease.

“I would research everything and ask the doctors all sorts of detailed questions,” Katrina says. “And they would all say, ‘I wish my students asked the kind of questions you do.’ When I heard that, I knew this field was something I wanted to go into.”

Katrina’s story is a powerful example that having great perseverance and optimism, even in the most difficult of times, can help anyone get over the many mental and physical hurdles that come with fighting vasculitis. Many of us within the community are incredibly proud of Katrina and her continued inspiration by virtue of her hard work and never-give-up attitude.

Your ticket for the: Katrina Bargender – Young Patient Inspired by Other Achievers with Vasculitis Completes Kids’ Triathlon