Kathy Olevsky: Enjoying Life in Remission from MPA and Pursuing Her Passions 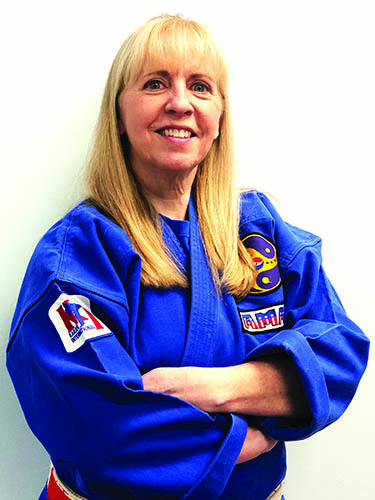 After Kathy Olevsky was diagnosed with ANCA-associated microscopic polyangiitis (MPA) in 2009, it took her about a year to realize that she would never be the same person she was before she became sick. But when you read her story, you’ll see that this determined 62-year-old is not only surviving, she’s thriving.

Kathy was a physically strong woman prior to developing vasculitis. She was an athlete and started training in martial arts right after college. The Raleigh, North Carolina, resident earned an eighth-degree black belt in karate, and she and her husband, Rob, had at one time owned five martial arts studios. The couple has two children, a 35-year-old son and a 27-year-old daughter.

While practicing karate, Kathy also taught and mentored other martial arts school owners. “I had loads of energy and worked 60 hours a week with no regrets,” Kathy said. But in the year before she was diagnosed, her health changed. She started having aches and pains at age 50. “But what pushed me over the edge was debilitating pain between my shoulder blades. It made me call 911 a few times.”

She was told repeatedly by specialists that she needed to learn to deal with stress better. Her primary care doctor, however, knew about the athlete and warrior living inside Kathy. “She continued to champion me,” said Kathy. “She knew me well, and if I was in her office, something was wrong.”

Kathy’s doctor sent her to 13 different specialists for testing to help determine a diagnosis. The lab work indicated that she was in kidney failure. She then went to a trusted friend who was also a nephrologist, and he diagnosed her with ANCA-associated vasculitis.

When she was first diagnosed, Kathy was admitted to the hospital at the University of North Carolina (UNC), Chapel Hill. She spent 21 days there and underwent plasmapheresis three times. She went through six years of treatment with short remissions, although she was never able to take her medications as an outpatient. She had reactions to all of them, which required in-patient treatment. She was later introduced to the biologic drug rituximab, which led to a long-term remission off treatment in 2013. Kathy then began the slow climb back to health.

“I have never regained my strength, although I see a strength training coach twice per week and have been doing this for the last two years,” she said. “It took me four years after remission to start to understand that no matter how hard I tried, physically I was not the same person.” Kathy currently sees Ronald Falk, MD, at UNC every three months for lab work and to keep tabs on her disease.

“I miss the physical person I was before, but I’m a stronger leader than I was—even then,” she said. She has traveled and presented at conventions, and has visited places as far away as Australia to share her expertise. Once a week she teaches black belts in her organization—a group of about 130 children, teens and adults—and her role is now teaching instructors how to teach. “I’ve spent years working in an atmosphere of positive energy and great customer service. We treat everyone like family and we teach them why they need to help spread the good in the world.”

Kathy also hosts the Vasculitis Foundation’s 2020 Road to Wellness webinar series and thinks it will be the most important work that she will ever do.

Visit: https://www.vasculitisfoundation.org/mcm_webinar/vf-road-to-wellness-webinars/. “I definitely had my dark moments. I relied on friends and family to help me get through those,” Kathy said. “I know in my heart, that my life is limited. I will not live as long as I want to, but I intend to travel everywhere and then share what I’ve learned.”

Your ticket for the: Kathy Olevsky: Enjoying Life in Remission from MPA and Pursuing Her Passions

Kathy Olevsky: Enjoying Life in Remission from MPA and Pursuing Her Passions