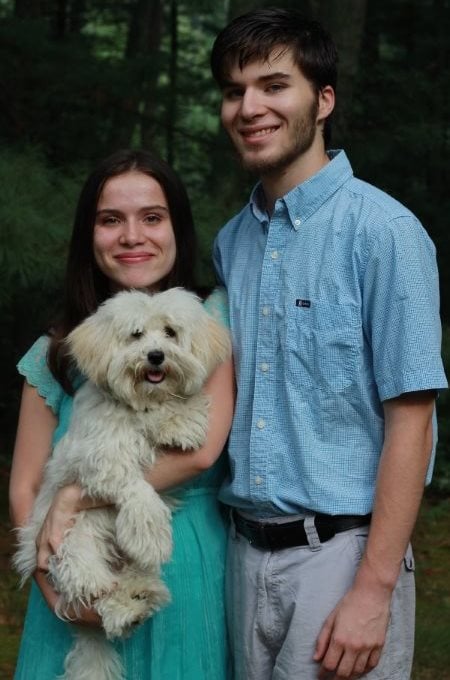 Julia with her twin brother, David, and Lucky the dog

Julia Metraux’s college plans were derailed in October 2016 after she developed an onset of symptoms that began as annoyances and then became dangerous.

“I was eighteen years old and in my second month at McGill University,” Julia recalled. “My entire body was covered in hives, and I was unable to consume even liquid without vomiting. I had severe angioedema in my face and hands. Finally, the hospital had to use multiple EpiPens to control my breathing.”

Julia experienced an initial round of misdiagnoses which unfortunately is common for many patients with vasculitis.

“The doctors just tested me for lupus. They either said they did not know what was wrong and stopped testing, or they accused me of searching for drugs, despite my urine and blood tests proving I didn’t use recreational drugs,” Julia explained.

After a year of fruitless testing, Julia actually received two diagnoses from doctors in two different countries in less than three months.

In November 2017, her rheumatologist at Boston Children’s Hospital concluded she had vasculitis based on her symptoms and an unusually high CRP report.

Two months later while vacationing in Puerto Vallarta, Mexico, Julia experienced another flare which landed her in the hospital for 10 days. The doctor treating her diagnosed her with urticarial vasculitis based on a skin biopsy, high CRP, and elevated ESR.

Today she is managing her urticarial vasculitis with her team of doctors at Boston Children’s Hospital.

Unfortunately, because her urticarial vasculitis wasn’t caught sooner, it left her with chronic pain that has slowed her recovery. Moreover, treating the vasculitis forced Julia to step away from her studies in gender studies at McGill University.

Despite the challenges, Julia is determined to get back on track with her academic pursuits. In August she will attend the, New School in New York City to pursue degrees in Global Studies and Journalism.

This summer Julia is completing a VF internship to help hone her journalism skills. She is researching and writing short articles about all of the nominated medical professionals for the VF’s V-RED 2018 Award.

The stories will be shared on the VF’s website and in future newsletters, and distributed to the physicians’ medical institutions and professional societies.