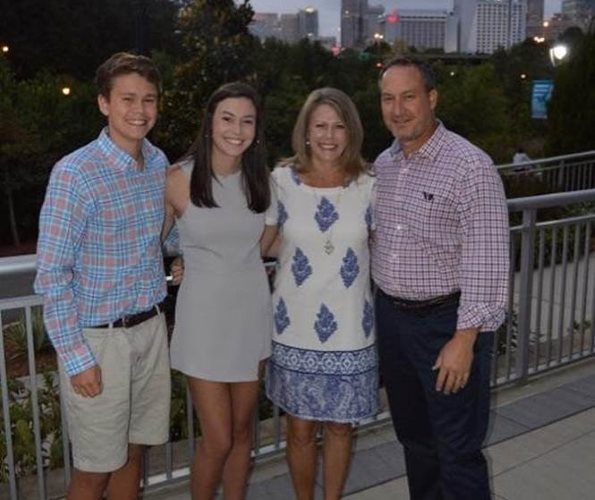 Fourteen-year-old Harrison Whetzel is an accomplished high school swimmer from Charlotte, North Carolina. He was diagnosed with GPA/Wegener’s in November 2015.

Over the past 18 months, Harrison has fought through four different sinus surgeries and had tubes put in his ears and tear ducts to try alleviating the constant sinus discomfort that began the summer before his 8th grade year of school.

Harrison has enjoyed a wealth of success in the pool. He posted the best time in the state for his U12 time classification, competing in the backstroke. He also swam freestyle, breast stroke, and butterfly for New South Swimming, a year-round competitive swim team in Charlotte.

As his 8th grade swimming season began, Harrison tried to stay in the pool when his Wegener’s symptoms started and was even able to swim after his first surgery.

But the symptoms got progressively worse. “It became hard to swim,” Harrison says. “The pain was too much, and I couldn’t really focus.”

After undergoing a second surgery in October 2015, Harrison hung up his swim cap for the rest of the winter while he and his parents tried to figure out what was wrong.

Luckily for the Whetzel family, Dr. Eric Mair at the Charlotte Eye Ear Nose and Throat Clinic (CEENTA) would provide some answers. In November 2015, Dr. Mair noticed a hole in Harrison’s septum and took some tissue to be biopsied, which ultimately led to a diagnosis.

Harrison’s father, Doug, says he got a call late on a Friday night from Dr. Mair, who explained that Harrison had Wegener’s granulomatosis.

At that point, Harrison started on a two-year dose of Methotrexate, along with 60 mg of prednisone per day to quell his symptoms. He was also taken out of school for the rest of 8th grade to avoid getting ill on the high doses of medication.

For the most part, the next year went well for Harrison. He was able to wean completely off Prednisone and was handling the Methotrexate fairly well. He returned to school, finishing 8th grade and got back in the swimming pool in the summer to prepare for high school tryouts in the fall of 2016.

But as many vasculitis patients can attest, there were still some frustrating times for Harrison and his family while trying to deal with the disease.

Despite getting back into swimming shape for his freshman year at Ardrey Kell High School and performing well enough in tryouts to earn a spot on the high school swim team, Harrison was left off the roster.

“It was just a real bummer for everyone,” Doug, explains. “Harrison had a weekly chemo shot the day before tryouts, but he was still in the pool the next afternoon, and posted the ninth best freestyle time of anyone there.”

Then in January, some of Harrison’s GPA/Wegener’s symptoms started coming back as he started to feel like the Methotrexate was wreaking havoc on his body. By last month, he switched to online classes, and he went back on prednisone. His doctors also had him switch off Methotrexate and onto Imuran, and they are hopeful his body reacts better to the new drug.

Despite the up and down stretches that many patients deal with while suffering from vasculitis, Harrison has stayed optimistic and hopes to swim again this summer.

“Ultimately, I’ll still plan on trying out for the swim team again,” he says. “It would mean a lot to make the team after all I’ve been through.”

Outside of his immediate high school goals, Harrison wants to become a youth ambassador for the Vasculitis Foundation to help promote awareness about the disease and to raise funding for vasculitis research in the Charlotte area.

Part of that desire stems from a lack of understanding about GPA/Wegener’s from Harrison’s friends.

Doug echoes those sentiments as well. “I think people see a young kid like Harrison who looks healthy on the outside, so they don’t have any idea what he’s been going through and the impact of [the disease].”

Your ticket for the: Harrison Whetzel – High School Athlete Swims While Managing GPA/Wegener’s