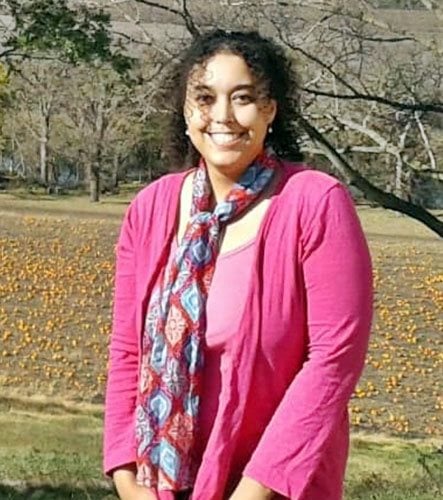 Thirty-two-year-old Erica Barram was just 22 when she was diagnosed with microscopic polyangiitis. Previously healthy, Erica didn’t know anything about autoimmune diseases until learning she had one.

She was completely unaware about how many people have vasculitis. “I was very scared when I was first diagnosed. I was also very angry, and I felt very alone. Thank goodness for the Vasculitis Foundation (VF). It really opened my eyes.”

Initial Misdiagnosis, Then a Breakthrough

When Erica first presented with symptoms of stomach pains and dark urine with an unpleasant odor, her doctor had no clue it was vasculitis. “He told me ‘Fifth Disease’ was going around my neighborhood and prescribed medication which didn’t help.” According to HealthOnline.com, Fifth Disease is a viral disease that often results in a red rash on the arms, legs, and cheeks. It’s fairly common and mild in most children, but it can be more severe for pregnant women or anyone with a compromised immune system.

In reality, Erica’s symptoms were indicators that something much more serious was happening. While at work, her supervisors pulled her aside and told her she looked anemic. Following another physician appointment and more tests, Erica was advised to go to Iowa City Hospital immediately. “My boyfriend, Jesse, and I had just moved across the country to be closer to my school. We were on our own, far from home and I had just started a new job. Now, we were dealing with this health issue.”

At Iowa City Hospital, Erica was diagnosed with microscopic polyangiitis. “At one point they conferenced in doctors from the Mayo Clinic to try to figure out my diagnosis. Before my biopsy, while I was in the ICU, a doctor or nurse who was with my roommate, suggested checking me for an autoimmune disease.”

A Teacher, a Caregiver, a Best Friend, and a Boyfriend

“Everyone needs a person who can make them smile when they don’t want to, and remind them of the good days during the bad ones,” said Erica, “Jesse has been this person for me for 13 years. He has been more than just a boyfriend. He has been a teacher, a caregiver, a support, a best friend, a therapist at times, and one of the most patient and loyal men I’ve ever met.”

Jesse found the VF’s website. “He called them,” said Erica. “The person he spoke with spent over an hour talking with him and giving him advice on how this was going to impact our future.”

They realized the severity of what they were going through. For Jesse, having someone to talk with was huge. “I don’t even know who he spoke with, but we remember the advice from that person. It truly benefited us and shaped our future. I learned that day that one helpful person could have a profound impact on our lives.”

Erica added, “I just love that the VF is made up of patients, caregivers, friends, family, and physicians because they relate to the ones actually living with vasculitis. It comes across this way each time I’ve had the pleasure of interacting with them. The VF has some of the most compassionate people I have come across, and I love what they do! Not every day will be easy, but there are others like you, and the VF is one place you can look to find support if you need it.”

Erica travels to the Mayo Clinic in Rochester, Minnesota, for treatment. She said that managing her health has become a full-time job.

She’s very grateful that her treatment is working and looks forward to when she can “celebrate the end of my infusions and hopefully prednisone therapy, and find the next immunosuppression medication that will keep my illness quiet for, hopefully, a long time.”

Your ticket for the: Erica Barram – Her Amazing Vasculitis Journey and the Phone Call that Changed Her Life