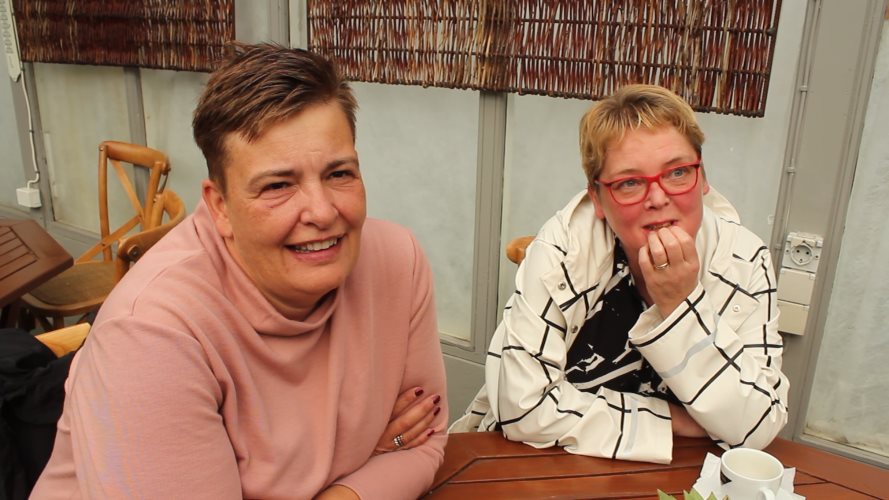 L – R: Drifa Alfreosdottir, and Maria Bjork Vioarsdottir. Drifa and Maria met with Ed Becker, VF Director of Marketing and Communications in August. Although Drifa has known Ed since 2002 when she joined his Polyarteritis Nodosa Support Network, this was the first time they met in person.

Having a rare disease such as vasculitis in a large, populated country like the United States can be challenging enough, but what if you are a patient with vasculitis in a small country the size of Indiana, and with a population of just over 332,000?

This is the reality for Drifa Alfreosdottir and Maria Bjork Vioarsdottir who live in Reykjavik, Iceland.  Born and raised in Iceland, they both have a deep love for their country, but also acknowledge some of the challenges that face a patient with a rare disease in their homeland.

Drifa was diagnosed in 2002 with Polyarteritis nodosa (PAN) after experiencing severe fatigue, dizziness and other symptoms that were originally attributed to household allergies. Maria’s diagnosis of GPA/Wegener’s followed a traumatic car accident in early 1997. Symptoms originally thought to be caused by post-accident surgeries were finally determined to be from vasculitis.

Drifa says that she had never met anyone else in Iceland with vasculitis. However, she knew there was at least one patient with the disease.

“After I was diagnosed with Polyarteritis nodosa in 2002, I asked my nurse if there was anyone else with the same disease,” recalls Drifa. “She said there was one other patient with vasculitis, but she couldn’t give me her name because of privacy rules. She only would say the patient’s first name began with the letter M. That was it.”

Over the next 15 years Drifa would occasionally wonder about this mystery patient known only by a single letter. “At least I knew I wasn’t the only person in Iceland with vasculitis,” Drifa said. “But I also knew I would probably never meet this person.”

However, something amazing happened on August 13, 2017 when Drifa joined Maria at the Icelandic Botanical Garden for a joint interview with Ed Becker, director of marketing for the Vasculitis Foundation.

When Drifa related the story about the nurse saying there was one other patient whose name started with M, Maria confirmed that she also knew that nurse and they soon realized that Maria herself was quite likely the other mystery patient.

Their amazing story underscores the compounded isolation patients with a rare disease may experience in a country as remote as Iceland. “We know there are some — not many of course – other vasculitis patients here. The problem is that we don’t have a way to meet each other because the doctors can’t share that private information. In a country like ours you really feel like you’re on your own,” said Drifa.

Maria agrees about the isolation, but she and Drifa have both found the Internet to be a bridge to at least communicate with other patients, and to stay educated about the disease. “I’m able to connect with other patients on Facebook if I feel that need,” says Maria. “Also, the Vasculitis Foundation has resources so I can learn the latest information I need to know.”

View a video interview with Drifa and Maria.

Your ticket for the: Drifa Alfreosdottir and Maria Bjork Vioarsdottir – The Challenges Of Living with Vasculitis in Iceland