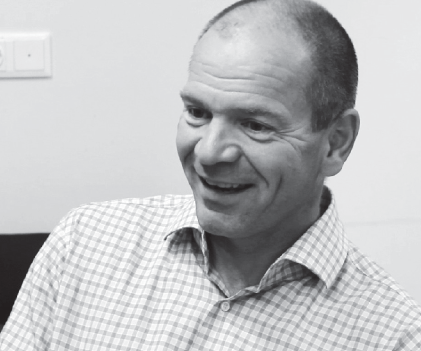 Dr. Björn R Lúðvíksson returned to his native Iceland in 2000 after developing an interest in treating and researching autoimmune diseases while working at the National Institutes of Health (NIH). Photo: Ed Becker

Imagine you are a rheumatologist who is given the opportunity to work in an office that is approximately 168 miles from the Arctic Circle. You will be surrounded by active volcanos, and massive glaciers. You’ll also endure sub-zero temps during a good portion of the year. Do you take the job?

For Dr. Björn R Lúðvíksson it was exactly what he wanted—to work in his native country of Iceland.

After a decade working in the United States, he decided to return to his country where he currently serves as the Professor and Head of the Department of Immunology at the University Hospital in Reykjavik, Iceland.

After graduating from medical school in Iceland, Lúðvíksson received his specialty in internal medicine at the University of Wisconsin. That was followed by working at the National Institutes of Health (NIH) in Bethesda, Maryland. It was at the NIH that he decided specialize in autoimmune diseases.

“At the NIH, I was in an environment that had a heavy focus on autoimmunity,” said Lúðvíksson. “I knew this was the area I wanted to concentrate.

After a few years at the NIH I was offered the position here at the University of Reykjavik. My roots and family are here so I was happy to make the move.”

Established in 1981, the Department of Immunology is the central service and research laboratory for rheumatologic, allergic and immunologic diseases in Iceland. The department offers a clinical treatment center for individuals suffering from autoimmunity, allergy, asthma, immune deficiency and other immunologic diseases.

According to Lúðvíksson, approximately 800 to 900 patients are treated for autoimmune conditions at their center. How many of those patients have vasculitis? It’s not a figure that is easily determined, but there’s no question it’s an extremely small number.

“I’ve seen maybe six to eight patients with vasculitis here in Iceland,” said Lúðvíksson. “But I can’t say an exact number of how many are here because there are so many factors.

“I have a very mixed bag of patients. Many patients don’t have a known diagnosis, and maybe half of my patients have a primary immune deficiency along with vascular problems.”

Understanding the prevalence and impact of all autoimmune diseases in Iceland is a key part of his research. He was instrumental in developing a web-based application currently in use at the hospital to provide greater statistical analysis for doctors and researchers on the patients being treated for autoimmune based diseases.

Your ticket for the: Dr. Bjorn Lúðvíksson – Treating Patients with Vasculitis in Iceland