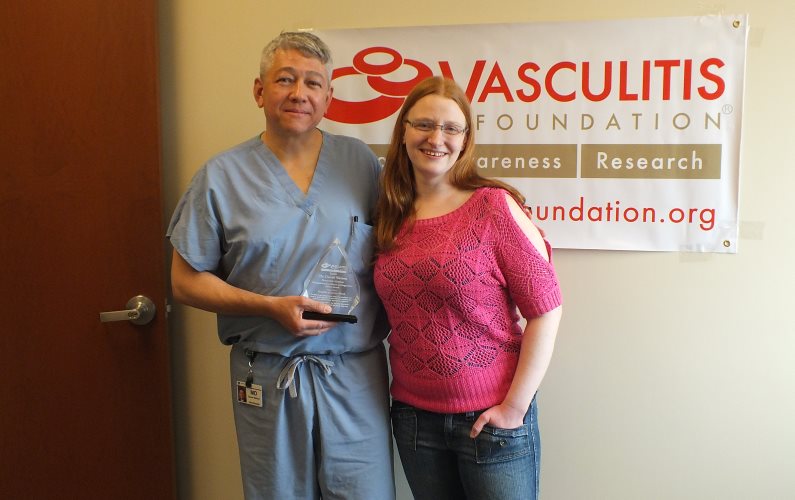 Daniel Watson, MD, FACS, an otolaryngologist at the Park Nicollet Clinic in St. Louis Park, Minnesota, has been named a recipient of the 2018 Excellence in Diagnosis (V-RED) Award from the Vasculitis Foundation, the world’s leading vasculitis support, education and research organization.

Watson was nominated for the award by his patient, Nicole Shankey of Minneapolis, following his early diagnosis of Wegener’s/GPA.

Shankey first encountered Dr. Watson in December 2010 when she went to the Methodist Hospital for a bronchoscopy after experiencing extreme coughing, shortness of breath and sinus symptoms for two months.

During the procedure, her vocal cords began to swell and she was rushed to the ER, where she was intubated and scheduled to receive a tracheotomy.

Watson, who happened to be on rotation that day, believed that she likely had an autoimmune disease and prescribed a high-dose of steroids for several days, instead of an emergency tracheotomy.

After five days on high-dose steroids, the vocal cord swelling had reduced. Shankey was extubated and was released from the hospital two days later. Eighteen months later, a biopsy confirmed that she had Wegener’s.

Had Watson not intervened, Shankey said she would been given a tracheotomy, which would have done irreversible damage to her trachea.

She nominated Watson for the V-RED Award because, in her words, “He listens to his patients, takes their concerns and symptoms seriously and does what he can to get behind the cause.

“He has knowledge beyond his spectrum of ears, nose, and throat that he puts to good use. And he is willing to go the extra mile for his patients. Educating the medical community about early diagnosis is so critical but also so challenging. Often it’s not a rheumatologist who first sees a patient manifesting symptoms of vasculitis.”

In addition to Watson, 41 other medical professionals throughout the world were nominated for the 2018 award. Three of them were selected for Honorable Mention, and all of the other nominees were given a certificate of appreciation by the VF.