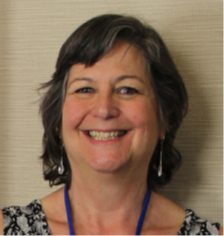 Obviously, there’s never a “good” time to be diagnosed with vasculitis, but sometimes an onset happens with ironic impact at the worst possible time.

In 2016, Caz Cazanov was looking forward to enjoying her new life after retiring from Kaiser Permanente, where she had spent 24 years working in health insurance legislative and regulatory policy.

She was in good health, having not had a sick day for nearly 20 years. Unfortunately, that is exactly when she began having symptoms that would turn out to be vasculitis.

In January 2017, Caz was diagnosed with eosinophilic granulomatosis with polyangiitis (formerly Churg- Strauss Syndrome) at the Kaiser Permanente hospital in Walnut Creek, California. She was treated with high-dose steroids and cyclophosphamide (Cytoxan®) infusions, and spent three weeks in the hospital and in a multidisciplinary rehabilitation facility.

Two years later Caz is thankful that her disease is in remission—although problems remain from the vasculitis. “I had a good response to my initial treatment and have been in remission since June 2017 without any disease flare,” says Cazanov. “Mycophenolate mofetil (CellCept®) is serving me well as a maintenance immunosuppressant, and I have a wonderful team of doctors caring for me. Some of my initial symptoms have resolved completely or improved. I do have issues that persist, including cognitive deficits, fatigue, hearing loss, tinnitus, and pain, strength, and mobility problems from nerve damage.”

When she was diagnosed, Caz and her husband, Steve Alexander, wanted to learn everything about the disease. Fortunately, the Vasculitis Foundation (VF) was holding its 2017 International Symposium in Chicago and it proved to be exactly what they were looking for to begin their vasculitis education.

“My husband and I were in serious information-gathering mode, and I was well enough to travel,” says Cazanov. “The symposium was especially useful because the multiple-day structure offers the opportunity to attend disease- and topic-specific breakout sessions. We learned a tremendous amount, and had the opportunity to ask questions of the physicians and others presenting.”

Caz was so impressed with the event that she and Steve have attended the last three VF conferences in Los Angeles, Seattle, and Phoenix. They are also planning to attend the 2019 International Symposium in Bloomington. She says the VF conferences are invaluable both for patients and caregivers.

“I have met many spouses, parents, and other caregivers at these meetings, and I think it’s such a wonderful opportunity for them to get information and support. I never really understood the role of the caregiver until I got sick and learned what it was to become dependent upon other people in so many ways,” she explains. “We learn something new and meet new people at every meeting.”

Although the disease leaves her with an uncertain future, Caz believes the more you can learn about vasculitis the better decisions you can make. “It’s a lifetime disease, and the best we can do is become educated, and find support from others. We feel fortunate we can find these things through the VF conferences and symposia.”

Your ticket for the: Caz Cazanov: Becoming an Educated Patient Through VF Conferences