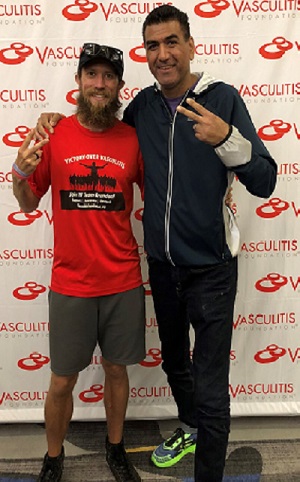 Art Diaz, a 49-year-old married father of two, embodies the southern California lifestyle of health and vitality. A native resident of Garden Grove in Orange County, Art works as a retail manager at Skechers, the lifestyle apparel brand headquartered in nearby Manhattan Beach. An avid runner, Art has spent many hours logging countless miles on local trails.

His running routine was interrupted in August 2017 when he suddenly developed a host of unexpected medical symptoms after a leg injury: blood clots in his legs, shoulder and chest pain, difficulty breathing, dramatic weight loss, and pronounced weakness. He went to Hoag Memorial Hospital Presbyterian in nearby Newport Beach, where, following blood tests that seemed to indicate vasculitis, Art’s cardiologist immediately referred him to rheumatologist Kathy Karamlou, MD. A few more tests later, Dr. Karamlou diagnosed Art as having granulomatosis with polyangiitis (GPA).

“It happened so quickly,” recalls Art. “Unlike many, I was fortunate to be diagnosed within three weeks. I’d never even heard of vasculitis, but thankfully my doctors were familiar with it. Dr. Karamlou put me on prednisone and Rituxan®, and I was off work for three months.”

Since then, Art has been managing his illness and has resumed running. He continues to taper off his medications and recently completed his fourth course of Rituxan. He also found support via the Vasculitis Foundation and, not surprisingly, from elite runner Brandon Hudgins, who, coincidentally, is sponsored by Skechers, Art’s employer.

“When I was first diagnosed, I started doing web searches to learn more,” he says. “That’s how I discovered the VF. I read Brandon’s book, “Going the Distance,” which I found extremely inspirational. I’m looking forward to meeting him at the next VF Symposium.”

“Support is critical,” says Art when asked what advice he’d give to newly diagnosed patients. “It can make you feel alone, but you’re not. Through the VF, you can interact with not only doctors and other medical professionals, but also with many individuals who share similar diagnoses and struggles. We’re there for each other.”

Your ticket for the: California Runner Finds Helpful Support Through VF and Brandon Hudgins