Brian Kilgarif: A Success Story in Using MobileCause to Raise Funds for Vasculitis 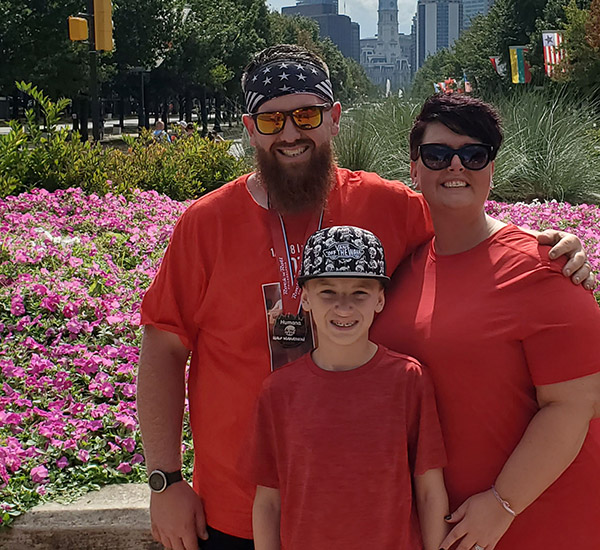 If you ever need a shot of motivation, just talk to Brian Kilgarif.

Brian is raising money for the VF on behalf of his wife, Steph, who was diagnosed with granulomatosis with polyangiitis (GPA) in 2002, when she was 16. His goals are to raise vasculitis awareness, and to honor the strength of his wife and all those fighting the disease.

Along the way, he became motivated to tackle a third goal, this one for himself: weight loss. Since January 2018, he’s shed an impressive 173 pounds.

But first, about his mission to raise money for vasculitis. Brian uses a fundraising tool called MobileCause, where he created his own donation page to share with his personal social network: https://app.mobilecause.com/form/Jg7sGQ?vid=q5cun. The VF is using MobileCause for its Annual Appeal 2019/Join Our Journey fundraising campaign, and hopes Brian’s story will inspire others to try the platform. (Brian is also sharing his efforts on Instagram at: @insecure_2_confident.)

For the second year in a row, the VF is using MobileCause for its Annual Appeal because more people are using phones and mobile devices to make donations.

“MobileCause is perfect because I have the link on my social media sites, so anyone, anywhere, at any time, can donate,” he said. “In the past, I’ve tried using flyers and a donation bucket at our family retail store, but I don’t feel I raised any awareness.”

“It has not been an easy journey for Steph, especially with the flares she has had in the past two and a half years,” Brian explained. She has been in the emergency room more than 20 times and admitted to the hospital nine times, on top of chemotherapy treatments every six months. In addition to GPA, Steph also deals with fibromyalgia and has undergone multiple surgeries.
Steph and Brian were married in September 2016, and the family, which includes Steph’s son, Drake, live in Downingtown, Pennsylvania. “While she is the one going through this, I try my best to be there for her,” he said.
Brian is committed to losing weight. His why is simple. “I was making excuses for being overweight and none of them were valid reasons.” One day he saw his profile in the mirror and thought, “What are you doing?” He instantly thought of Steph, who has no control of her situation. “I’m doing all these things simply because I can.”
In the future, Brian plans to complete a full marathon (he finished his first half-marathon this past September) and an Ironman 70.3 triathlon. He is inspired to try, even if he fails, because there are so many people like Steph who push themselves every day.

“I’ve gained confidence, self-belief and a very positive mindset,” he said. “I’ve been overweight my entire life and struggled with food. Now I look at any obstacle as a stepping stone to become a better person, husband, stepdad, son, brother and friend.”

His weight loss has given him a platform to further support Steph and her disease. “She is truly a warrior and is a big source for my strength,” he said.

Your ticket for the: Brian Kilgarif: A Success Story in Using MobileCause to Raise Funds for Vasculitis

Brian Kilgarif: A Success Story in Using MobileCause to Raise Funds for Vasculitis