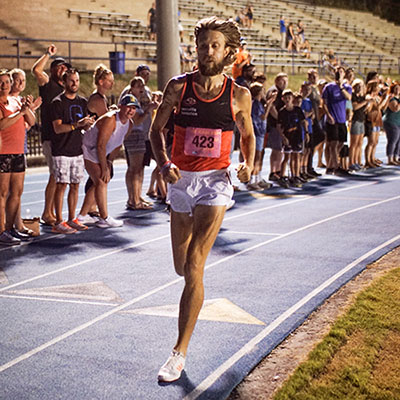 Most days, professional distance runner Brandon Hudgins wakes up with a burning desire to reach the goals he’s dreamed of since he was 15 years old. But there have been days when the obstacles seemed insurmountable. At one point, in 2013, he quit running entirely and threw his gear in the trash. He couldn’t handle the mental toll of another setback, and every time he went through a rough patch, he had to remind himself that he chose his path. No one was making him run.

At 33, Brandon is an accomplished athlete, running coach and author, who was diagnosed with granulomatosis with polyangiitis (GPA) in 2008. Now he has his sights on the 2020 U.S. Olympic Team Trials for Track & Field, June 19-28, in Eugene, Oregon. Brandon already has a long list of accomplishments to prove that he hasn’t let his illness get in his way. He’s an ambassador for the VF, founder of the Victory over Vasculitis campaign, made it to the Olympic Trials in 2016, and was named a 2017 NORD® Rare Impact Honoree for his volunteer work in the vasculitis community.

Brandon has had three relapses since his diagnosis; his third and most serious relapse occurred in late 2016 and lasted almost two years. He had 10 Rituxan® infusions, spent nine months on high doses of prednisone and nearly lost his kidneys. With treatment, his kidneys were saved, and in early 2018 with a clean bill of health, he slowly started training hard again.

Following some extensive blood work in 2019, Brandon found out he was battling a rare form of anemia. After getting his iron levels restored, and his body responding to training, he had several good races where he started to feel like his old self. He finished the season with a 4:03 mile against a very good field of professional runners.

Brandon is now in remission and his goal for 2020 is to race the 1500m at the June Olympic Team Trials at the University of Oregon. A normal training week for Brandon is 80-95 miles divided up into 11-12 runs. Four to five days a week he runs twice a day; Saturdays are for a light recovery jog and Sundays are long runs between 15-19 miles. Included are two weightlifting and physical therapy sessions at the gym. Brandon currently coaches in person and online, and works part time at a running store. “Each year, I try to live a healthier and more balanced life. For 2019, I can certainly say that I achieved that goal,” he said.

Brandon is currently setting up his racing schedule for 2020. He’ll be running a brief indoor track season, which started in late January, then another one to two races in February before shifting the focus to outdoor track. His outdoor racing starts in April and he will have to qualify at 3:37.50 for 1500m by June 7.

The Olympic Team Trials for Track & Field include three rounds: The first will be three heats of 10 people; 24 will advance to the semi-finals; 12 will make the final and then the top three winners will make the team and represent the United States at the 2020 Summer Olympic Games in Tokyo, Japan, in late July.

The easiest way to support and follow Brandon on his journey to the Olympics is on social media. He does his best to post regularly and enjoys shedding light on what his lifestyle and training are like. “Some of my races are televised or streamed online, and I try to let everyone know when and where they can watch. If I’m in your city, come out and yell!” he said.

“We look forward to cheering Brandon as he chases his Olympic dream,” said Joyce Kullman, executive director of the VF. “Many of us in the vasculitis community have benefited from his optimism, enthusiasm and advice to set dreams and to never give up, no matter what challenges we face.”

As VF ambassador, Brandon is a mentor to other patients with vasculitis, encouraging them to stay active and live life to the fullest. See Brandon and college student Katrina Bargender discuss being active with vasculitis and how they motivate each other at: bit.ly/35LvEan. The video is part of the VF’s Vasculitis Voices series, recorded at the 2019 International Vasculitis Symposium last July.

Your ticket for the: Brandon Hudgins Sets His Sights on U.S. Olympic Team Trials in 2020