Brandon Hudgins Looks Ahead to New Season of Competitive Racing 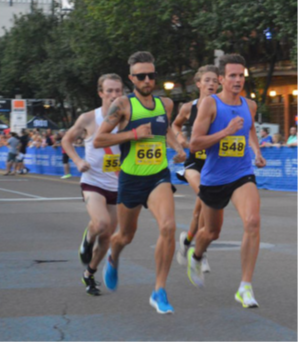 Three years ago, professional runner, Brandon Hudgins, beat the challenges from his granulomatosis with polyangiitis (GPA, formerly Wegener’s) to qualify for the 2016 Olympic Trials in the 1500-meter run.

Although he didn’t make the Olympic team, Brandon hasn’t lost his determination to race competitively and is keeping a hopeful eye on the 2020 Olympic Games.

In this exclusive interview with the Vasculitis Foundation (VF), Brandon talks about some serious health setbacks, and why he’s optimistic about his goals this year.

VF: Talk about the past few years and how you’ve overcome some serious health setbacks due to your vasculitis.

BH: For those that aren’t aware, I suffered a severe relapse in 2017 that nearly cost me my kidneys. It was by far my worst year of health since my initial diagnosis in 2008. After two rounds of four rituximab infusions in 2017, my disease activity seems to be calming down.

VF: How would you summarize last year, in terms of training?

BH: In 2018, my body never seemed to soak up the training, no matter how hard I trained. I was running times 10 to 15 to 20 seconds slower than my best marks. Now that might not seem like a lot to the average runner, but often the gap between first place and 12th place in professional races is only 4 or 5 seconds. I received the last of my four scheduled infusions in October (now only down to one each time instead of four thankfully) and have set my sights on 2019! While 2018 brought a lot of disappointing results, I continued to keep putting myself out there and competing without fear. I can hold my head high and look towards the future.

VF: What’s ahead for this year?

BH: For 2019, the main goal is to get healthy, and do the training we know is required for me to be in the shape I need to be to race at the professional level. Ultimately, this year is about getting in as much work as possible and finding a few opportunities to race at a high level again.

VF: What about the next Olympics? Is that something on your radar?

BH: With the Olympic Trials and Olympic Games on tap for 2020, I have to make sure that everything we do this year is in preparation for next year. We can’t cut any corners this year that will affect us down the road. By late April or May, I should have some concrete race plans for June and July. If things continue to progress at the level I’m currently training, I could see another trip under 4 minutes in the mile this summer!

This article originally appeared in the March/April 2019 VF newsletter.

Your ticket for the: Brandon Hudgins Looks Ahead to New Season of Competitive Racing

Brandon Hudgins Looks Ahead to New Season of Competitive Racing