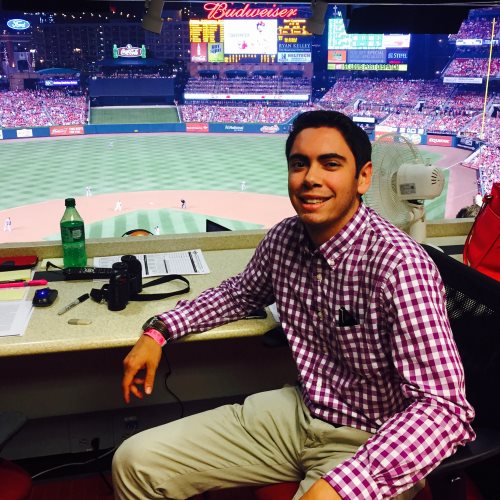 Tune into any of the sports broadcasts for KRES Radio in Moberly, Missouri, and you will likely hear the voice of Ben Wilson doing the games’ play-by-plays. At 24 years old, the University of Missouri Broadcast Journalism major already has built an impressive fast-track of broadcasting experience behind him.

Ben’s journalism career is on an upward trajectory; however, it was only a couple of years ago, that the path was interrupted by a curve ball—a diagnosis of EGPA/Churg-Strauss syndrome. Despite the diagnosis and subsequent treatment for vasculitis, Ben is determined to follow his dream of being a professional sports broadcasting announcer.

His EGPA/Churg-Strauss symptoms first appeared during the 2013 Spring semester at Mizzou. “I developed a cough and some occasional wheezing but that was basically it,” Ben recalls. “I figured I had nothing more than an extended cold and that I would just need to get some rest for my symptoms to go away. But through the rest of that semester, the symptoms continued to linger.”

Over the summer, Ben’s condition didn’t improve. His parents, Cory and Susan, who are both physicians, put him on a course of prednisone and an inhaler to treat the worsening asthma. The results were immediate and positive. However, it proved to be a temporary respite.

“The thought was that as long as I was on a daily inhaler, my respiratory problems would be done,” says Ben. “I felt great throughout that summer, and moved back into the fraternity house for my junior year in August. But by mid-September, some of the original symptoms started to come back and then get worse.”

The EGPA/Churg-Strauss symptoms impacted his performance and academic coursework. Ben says the grueling broadcasting schedule and the extensive travel only exacerbated his symptoms.

“Doing play-by-play is hard enough without being able to breathe while you’re on the air. I can still remember struggling to get through some of those broadcasts, and it worsened the quality of my on-air work. By the end of the year, I had made four trips to the Emergency Department, all for asthma attacks,” Ben explained.

Painful rashes, abdominal pains, and more respiratory problems eventually led to Ben getting a diagnosis of vasculitis in July 2014. He was put on 60 mg of prednisone and Cytoxan and Ben returned to Mizzou for his senior year in 2015.

Although the treatment helped him to feel “normal”, Ben says he quickly learned that he couldn’t return to the same social lifestyle that he had enjoyed before the illness.

Today, Ben is in remission. He takes 5 mg of prednisone, and CellCept to manage his EGPA/Churg-Strauss.

It has been two years since his diagnosis and Ben says the biggest challenge has been finding the most effective type of chemo that will allow him to wean off prednisone.

The diagnosis of vasculitis may have slowed Ben down at the beginning, but it hasn’t come close to ending his drive or passion for broadcasting. He regularly works 50+ hours at the radio station, but he says it’s part of what he has to do to get the pay-off — a career as a professional sports broadcaster.

“Throughout the next few years, my goal is to keep improving my on-air demo, maintain and grow my current network of contacts in the industry, and put myself in a spot to get closer to my ultimate goal of calling games for a national network.”

We received the following request: I would like to ask, did any other patients with Polyarteritis nodosa (PAN) have hepatitis B vaccine near the time they started getting their first PAN symptoms? I had one when I was 16 and first had symptoms. Thank you. [email protected]

Your ticket for the: Ben Wilson – Pursuing Broadcasting Career while Managing EGPA/Churg-Strauss