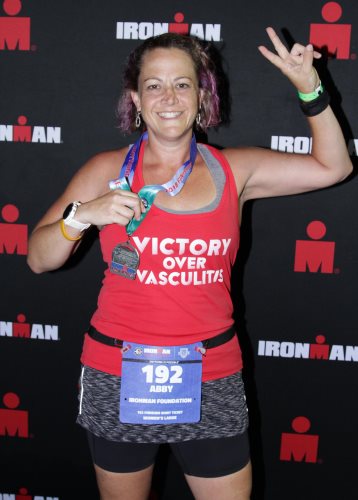 On Sunday, July 22, Abby woke up in Lake Placid, New York, a village in the Adirondack Mountains known for its picturesque natural environs—trees, trails and lakes—and for being the site of the 1932 and 1980 Winter Olympic Games.

It was an important day for Abby, a psychologist from Alexandria, Virginia, who has dedicated her career to helping clients manage a variety of personal issues. This, however, was a day that Abby would test her own mettle.

In a short time, Abby would join many other people from across the U.S. who were in town to take part in the Ironman Lake Placid, the nation’s longest-running Ironman event.

Abby completed the 2.4-mile swim, 112-mile bike ride across wet, hilly terrain and 26.2 miles of running and walking in 15 hours and 38 minutes, later declaring “Victory over Vasculitis!” on her Facebook page.

Just three years before, in 2015, Abby had planned to compete in her first-ever ironman distance race as part of a fun, friendly competition with her older brother, Fred.

Two months before that event she was diagnosed with granulomatosis with polyangiitis.

“The illness changed my life significantly,” she recalled. “I went from focusing on my training to training while under my doctors’ care. I was pushing my limits—I wanted to be able to continue pushing my limits and prepare for the race.

“In 2015, I did an iron distance triathlon in Wilmington, North Carolina called the PPD Beach2Battleship Triathlon and chose to delay immunosuppressive treatment until after the race.”

Determined not to let anything get her down as 2015 rolled into 2016, Abby—by now taking high doses of prednisone and being monitored on an ongoing basis—tried to keep training in the new year.

“After I started treatment, I tried to train for another one in 2016, but never felt ready because of the impact of the prednisone,” she says.

“In 2017, I was able to do a half ironman but it was really hard because of the prednisone taper. I did compete against my brother that year and still beat him by 10 minutes once I was finally off the prednisone.

“Then, I contacted Brandon Hudgins and asked him to help me train for the Big Sur Marathon in California in 2018.“

After working with him for a bit, I decided to go whole hog for an ironman which was my victory over vasculitis in Lake Placid.”

This year, she’s pleased to note, her granulomatosis with polyangiitis went into remission. “My other coaches for the Ironman Lake Placid didn’t even know about my GPA.”

Abby is now about to undergo plastic surgery to correct the damage the disease caused to her nose. Still as competitive as ever, she looks forward to the next event, although she doesn’t yet know what it will be. And she will have a period of recuperation following surgery.

She believes in the power of motivation and advises others with vasculitis to “Listen to your body, stay focused and keep your eye on the prize.”

Your ticket for the: Abby – Triathlete with GPA, Coached by U.S. Olympics Hopeful Brandon Hudgins,
Declares Victory Over Vasculitis