Life As A Zebra Fundraiser 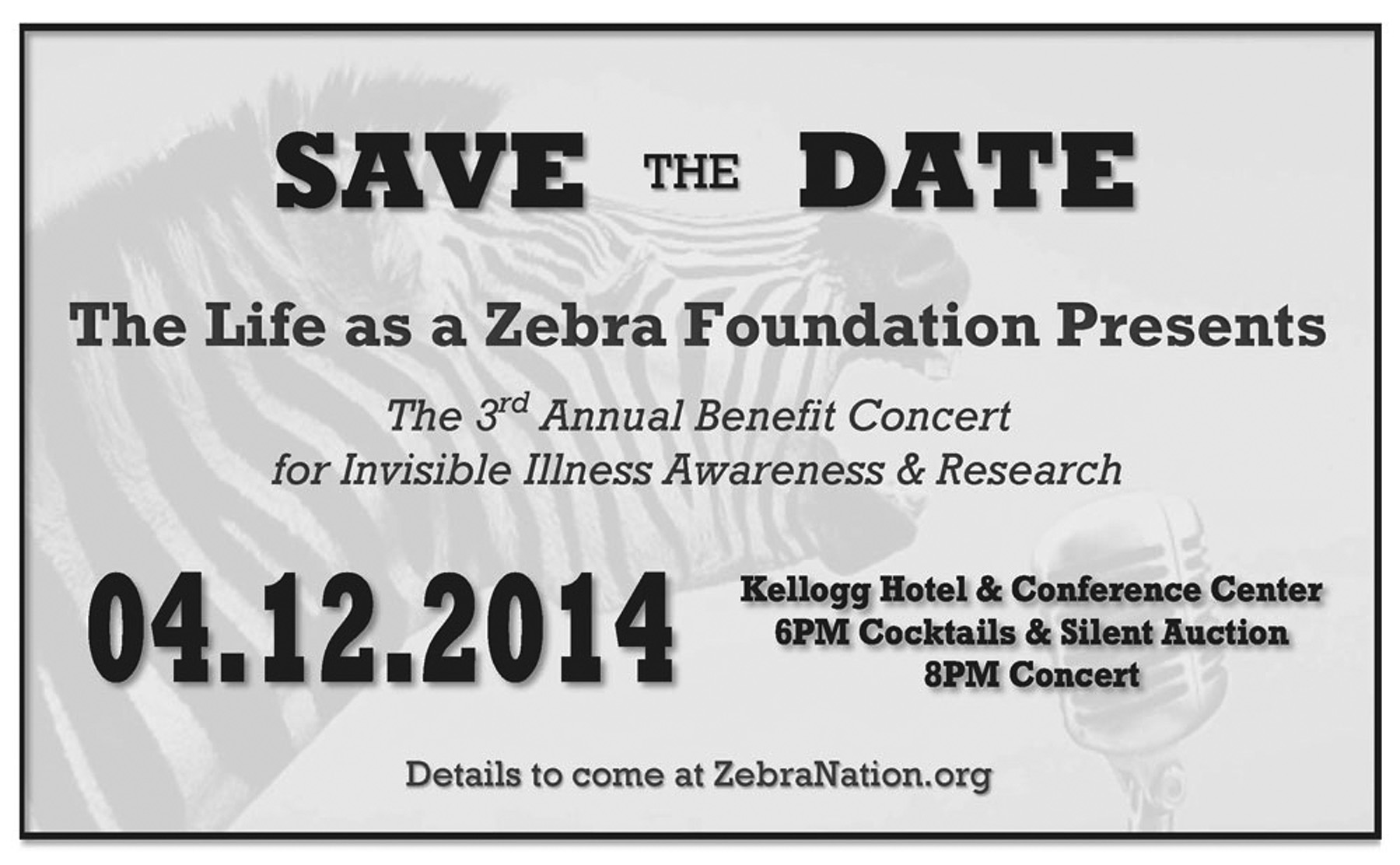 Life as a Zebra Foundation’s Mission

The primary purpose of the Life as a Zebra Foundation is to receive and administer funds for the purpose of education and charitable contributions for education, prevention, treatment, and research of various rare, invisible illnesses including, but not limited to, Ehlers-Danlos Syndrome, Dysautonomia, and vasculitis.

The Foundation is the brainchild of sisters, Katie Dama Jaskolski and Allie Dama.

“Be miserable. Or motivate yourself. Whatever has to be done, it’s always your choice.” ~Dyer

Katie is 32 years old and works as a pre-kindergarten and kindergarten teacher in Lansing, Michigan. She is a former competitive gymnast, spending 15 years at Great Lakes Gymnastics Club in Lansing and Twistars Gymnastics Club in Dimondale, Michigan. Katie was on the Michigan State Gymnastics team her freshman year as an Academic All American, but had to “retire” from the sport after having multiple arm and hand reconstruction surgeries. Katie graduated from MSU in 2004 with a BA in Elementary Education, and she graduated from the College of St. Catherine with an MA in Curriculum with an Early Childhood Montessori credential. Katie has a passion for teaching and advocating for others. Her hobbies include writing, exercising, dancing, and spending time with friends and family.

After becoming suddenly sick in 2010, and spending months seeing multiple doctors, Katie was eventually diagnosed with Ehlers-Danlos Syndrome and Dysautonomia (POTS). She spent most of 2010 and 2011 very ill, unable to work, in a neck brace, back brace, and wheelchair. After going through intensive rehabilitation and other treatment methods, Katie has been able to return to work half-time, and has accomplished many physical goals such as 5k’s and Olympic style weight lifting.

Katie has made it her mission to help raise awareness for these rare and often overlooked diseases. One way Katie does this is through her website, Life as a Zebra. In 2012 and 2013 Life as a Zebra was nominated multiple times for various health activist awards through the online organization, WEGO Health, including Best Blog, Health Activist Hero, and the Trailblazer Award. In November 2012, Life as a Zebra Foundation became a domestic non-profit foundation.

Each day Katie likes to remind herself of this, “Be miserable. Or motivate yourself. Whatever has to be done, it’s always your choice.” ~Dyer

Allie Dama is 25 years old and a full-time graduate student at Virginia Commonwealth University in Richmond, Virginia. Allie will earn her Master’s degree in occupational therapy in 2014, and she aspires to work with children who have developmental disabilities and neurological impairments. Allie is a former competitive gymnast, spending 15 years at Twistars, and another four years as an NCAA Division I varsity gymnast at the University of Maryland.

In 2008, just months after completing her most successful collegiate gymnastics season to date, Allie grew mysteriously ill. Despite numerous medical appointments and tests, doctors were unable to pinpoint a diagnosis. It was only after 48 days of hospitalization, near fatal seizures, dozens of specialists, and a kidney biopsy that Allie was diagnosed with Polyarteritis nodosa vasculitis (PAN). Since that time, Allie has had several more hospitalizations and years of corticosteroid and chemotherapy treatment. She was forced to retire early from gymnastics competition and had to take several months off of school to regain strength and basic functioning. Despite the long and difficult road, Allie’s PAN is now in remission and doctors are positive about her prognosis. These recent years of struggle have taught Allie to appreciate every day.

Allie now lives by the motto: “The only difference between a good day and a bad day is your attitude” ~Brown

Your ticket for the: Life As A Zebra Fundraiser

Life As A Zebra Fundraiser