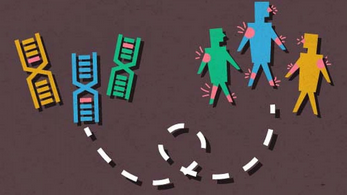 “Our team of researchers at the NIH discovered a new form of vasculitis  and called it VEXAS. VEXAS is caused by genetic mutations in a portion  of a patient’s blood cells. Before we knew about VEXAS, these patients were diagnosed with other forms of vasculitis, such as relapsing polychondritis, polyarteritis nodosa, and giant cell arteritis. Now that we know the cause of VEXAS, we can start working on new treatments that may one day cure  this  disease.”

Researchers from the National Institutes of Health (NIH) have discovered a new inflammatory disorder called vacuoles, E1 enzyme, X-linked, autoinflammatory and somatic syndrome (VEXAS), which is caused by mutations in the UBA1 gene. VEXAS causes symptoms that included blood clots in veins, recurrent fevers, pulmonary abnormalities and vacuoles (unusual cavity-like structures) in myeloid cells. The scientists reported their findings in the New England Journal of Medicine.

Researchers at the National Human Genome Research Institute (NHGRI), part of the NIH, and collaborators from other NIH Institutes took a unique approach to address this challenge. They studied the genome sequences from more than 2,500 individuals with undiagnosed inflammatory diseases, paying particular attention to a set of over 800 genes related to the process of ubiquitylation, which helps regulate both various protein functions inside a cell and the immune system overall. By doing so, they found a gene that is intricately linked to VEXAS, a disease which can be life-threatening. So far, 40% of VEXAS patients who the team studied have died, revealing the devastating consequences of the severe condition.

Usually, researchers discover a previously unknown disease by studying several patients with similar symptoms, then searching for a gene or multiple genes that may play a role in causing the disease. However, this was not a viable option for the NIH research team.

“We had many patients with undiagnosed inflammatory conditions who were coming to the NIH Clinical Center, and we were just unable to diagnose them,” said David B. Beck, MD, PhD, clinical fellow at NHGRI and lead author of the paper. “That’s when we had the idea of doing it the opposite way. Instead of starting with symptoms, start with a list of genes. Then, study the genomes of undiagnosed individuals and see where it takes us.”

Out of the genome sequences of 2,560 patients with undiagnosed inflammatory conditions, over 1,000 patients had undiagnosed recurrent fevers and body-wide inflammation. The rest, part of the NIH Undiagnosed Diseases Network, had unusual and unclassified disorders.

“Our objective was to see if any of the 2,560 patients shared variations in the same gene,” said Daniel Kastner, MD, PhD, scientific director of the Intramural Research Program at NHGRI and a senior author of the paper. “Instead of looking at clinical similarities, we were instead taking advantage of shared genomic similarities that could help us discover a completely new disease.”

“We were amazed to see this and wondered what it could mean. And that’s when it clicked—this was only possible if there was mosaicism in these men,” said Dr. Beck.

Mosaicism occurs when some people have groups of cells with mutations that are different from the rest of the body. The team predicted that there were specific cells in the patients’ bodies that carried the UBA1 gene in its normal form while other cells carried the gene in its mutated form.

Using DNA-sequencing methodologies, the researchers found that the mosaicism was indeed present in the patients’ myeloid cells, which are responsible for systemic inflammation and act as the first line of defense against infections.

The researchers then analyzed the genome sequences of additional individuals from various NIH cohorts and databases, which led to the discovery of an additional 22 adult males with the UBA1 gene mutations. Most of the individuals had symptoms that included blood clots in veins, recurrent fevers, pulmonary abnormalities and vacuoles (unusual cavity-like structures) in the myeloid cells.

Out of the combined 25 individuals, researchers were able to find a link between the various clinical rheumatologic and blood-related diagnoses made for the patients. Because these conditions exist in people with UBA1 mutations, the team grouped the various conditions into a new disease: VEXAS.

“By using this genome-first approach, we have managed to find a thread that ties together patients carrying all of these seemingly unrelated, disparate diagnoses,” Dr. Kastner said.

The researchers hope that this new genome-first strategy will help healthcare professionals improve disease assessments and provide appropriate treatments for thousands of patients who have various inflammation-related conditions. The study may also pave the way for a new and more appropriate classification of inflammatory diseases.

NHGRI is one of the 27 institutes and centers at the National Institutes of Health. The NHGRI Extramural Research Program supports grants for research, and training and career development at sites nationwide. Additional information about NHGRI can be found at https://www.genome.gov.

About the National Institutes of Health (NIH): NIH, the nation’s medical research agency, includes 27 Institutes and Centers and is a component of the U.S. Department of Health and Human Services. NIH is the primary federal agency conducting and supporting basic, clinical, and translational medical research, and is investigating the causes, treatments, and cures for both common and rare diseases. For more information about NIH and its programs, visit www.nih.gov.

Your ticket for the: Scientists use Clues in the Human Genome to Discover new Inflammatory Syndrome