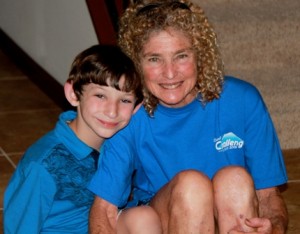 My name is Sally.  Over the months subtle signs showed something unusual going on in my body, high blood pressure, slowed times, unexplained stiffness, malaise, to which the doctor merely signed off as the usual older female hypochondria.

By triathlon season my attempts to compete became attempts to stay on my feet, and by May I was in the hospital with failing organs and a team of doctors who were now trying to keep me alive. With the diagnosis of cryoglobulinemia, the treatments began and my life was changed forever. With all the treatments known to vasculitis sufferers, I was brought back to a state of health that allows me to still use my bike as my main means of transportation as it has all my life, garden, workout, but I can’t run or race.

Between peripheral neuropathy, breathing problems and all the many problems of this very rare vascular disease, I can’t do the things I love to do more than anything. It is hard to believe the body can be so besieged by so many problems and there is so little the medical world can do about it. From constantly bruised, bleeding skin and morning malaise to reflux, Raynauds, stiffness, and all manner and form of breathing problems, I never know what to expect next. I haven’t given up on going back to the world I love. Others have made it; I hope someday soon, I will too.

Your ticket for the: Sally’s Story