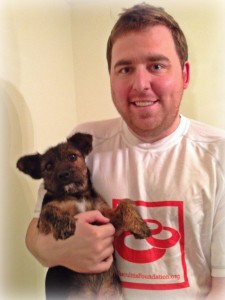 My name is Rob. I am 25 years old and was diagnosed with GPA in August of 2012. I am a law student in Montgomery, Alabama and hope to graduate in December of 2013. I have aspired to be a criminal defense attorney and then perhaps a professor at the university level however, a new passion of finding a cause and cure for GPA has emerged in the last 9 months.

Doctors tell me that my journey with vasculitis and GPA probably started in the fall of 2010. That fall I moved from Tennessee to Montgomery, AL to start my 3 years of law school. Labor day weekend of that year I developed an inner ear infection that would plague me for the remainder of that semester. Antibiotics and other treatments failed to bring about any relief. Finally, the week before Thanksgiving I had sinusitis surgery on my left ear. In January of 2011, my ENT inserted a tube into my left ear. The tube was removed in August of 2011.

From August 2011 until July of 2012, I lived a normal life. I experienced no symptoms and was doing well in law school. Of course law school brings about a certain level of stress, I also was dealing with the ordeal of being separated from my wife, which eventually lead to a divorce. But in February of 2012 the cutest bundle of energy I have ever seen came into my life, Zeus! He was a puppy of a law school friend who couldn’t keep him so I quickly adopted him. He was my stress relief when law school or other things got me down. We love to play fetch and go running in the park together. He is the definition of man’s best friend.

Then in June 2012, I helped my sister and her husband move from one apartment to another in the sweltering Tennessee heat. After the move, I began to experience extreme joint pain and would run fevers in the evening. I developed a cough in late July and finally went to a doctor. The doctor thought it was bronchitis and possibly RA. I came back to Montgomery in August of 2012 to begin my final year of law school.

In August my symptoms continued. I would run a high fever, joints would swell and soon I had no energy. I went to a general practitioner who thought I had pneumonia. We began to do IV treatments and more antibiotics. I would attend class, get my IV treatment, and then get to into bed because I would be too exhausted to do anything. I competed in a trial competition at school, despite being nauseated, running a fever, and sweating profusely.  My trial partner and I made it to the finals of the competition, mostly because she was amazing and carried me through!

Finally, the doctor I was seeing, after I was not responding to treatment for 2 weeks, ordered more blood tests and based on the results referred me to a rheumatologist. Without question, this rheumatologist saved my life. At my first meeting with the rheumatologist, he immediately suspected GPA. He ordered a chest x-ray, a full chest CT scan with contrast and more blood work. Within 24 hours he had me scheduled for lung biopsy, which would confirm his initial thought of GPA.

My family and I decided that we would use the rituximab treatment. I withdrew from school for the fall semester and went home with my parents to Saint Louis. My condition worsened in September and I was hospitalized in early September. I went through quite an ordeal at the hospital, having to have several blood transfusions, a dozen plasmapheresis, a week in Medical ICU, 2 different ventilations lasting approximately 4 days. After over 3 weeks in the hospital I was discharged on September 27.

I was truly blessed to have wonderful doctors in Saint Louis. The nurses, which were assigned to me, were the best in the business. While I was ventilated, the nurses and doctors not only did an amazing job of getting me better, but also took care of my amazing family who never left my side the entire time.  I am blessed to have 5 siblings and 2 of the best parents in the world. When I was taken to the ICU they split into pairs and made sure that I was never left alone. The staff at the hospital continually commented on how they had never seen a family quite like ours.

I am now currently being maintained on methotrexate, prednisone, as well as several heart medications. I returned to school in January and Zeus and I have changed our approach to law school. We get more sleep, eat better, and don’t let the law school dragon get us down. I was a runner before vasculitis (completing both a half and full marathon and running several different 5 Ks) and I continue to be a runner after my diagnosis. I completed my first 5 K after being released from the hospital in March. While originally supposed to graduate May 11, 2013, my plans have been postponed by about 6 months. But Zeus and I are determined to finish this law school marathon.

Your ticket for the: Rob and Zeus