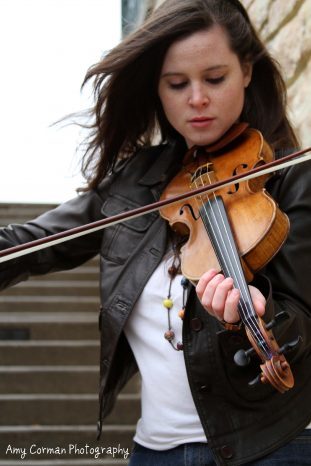 The Modbo presents Violin for Vasculitis, an evening of chamber music with violinist Allison Lint and pianist Lauren Ciborowski on Friday, March 16, at 7 pm, $7-10 suggested donation.

The Modbo is located in the Arts Alley in downtown Colorado Springs at 17 C E. Bijou.  Street parking is available, but The Modbo recommends the lot on Cascade just north of Bijou, which is only a $1 after 3 pm. The Modbo can be reached at [email protected], themodbo.com, or 719-633-4240.

A native of Northeast Ohio, violinist/violist Allison Lint is a recent transplant to the Kansas City area. She performs as concertmaster of the Hays Symphony Orchestra as well as principal viola of the KC Westwood Ensemble, and has also appeared with the Wichita and Topeka Symphonies.

At the age of 17, Allison was diagnosed with Granulomatosis with Polyangiitis (GPA, formerly Wegener’s Granulomatosis). Now in remission, she partners closely with the Vasculitis Foundation to promote awareness and education of rare autoimmune diseases.

In 2011 Allison founded Violin for Vasculitis, Inc., a nationwide initiative with the goal of an event in all 50 states. As a participant in the Colorado College Summer Music Festival in 2010, she played a collaborative outreach concert at The Modbo Gallery, and was inspired by her positive experience there to include Colorado early in V4V’s tour agenda.  Joined again by pianist Lauren Ciborowski (our most frequent V4V collaborator!), the violin-piano duo will present a program of works by Bach, Schumann, Satie, Kreisler, and Bruch.

Lauren Ciborowski began playing piano at the age of 5 and has not stopped since her mastery of “The Little Tugboat.”  As an Army brat, she has lived, and thus performed and studied, all over the United States and Germany.  Lauren graduated magna cum laude from Colorado College in 2004 with her BA in Southwest Studies and minor in German. Courtesy of her liberal arts education, Lauren has worked as a Native American liaison, barista, dental assistant, financial advisor, marketer, administrative assistant, and bartender. In 2009, she opened an award-winning gallery in Colorado Springs, The Modbo, out of which she runs a musical cabaret.  She has worked as a professional pianist for nearly a decade, and is an accomplished ballet accompanist.  Lauren also plays chamber music, plays and sings with her band, and maintains an active teaching studio in downtown Colorado Springs.

Your ticket for the: Violin for Vasculitis Free Recital – Colorado Springs