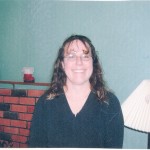 The Gift of Vision

Two years ago, Dovie, a then 30-year-old mother of three young children, was diagnosed with diverticulitis, a gastrointestinal infection which is uncommon for people younger than 40. Her doctors were surprised because of her age; Dovie was surprised because she had always been exceptionally healthy.

What followed was both scary and painful for Dovie: mouth sores, red bumps on her legs and underneath her arms, and blurry vision in her right eye. She could still see with the left eye, until one morning when she woke up with severely blurred vision in both eyes. She was driven to an eye doctor and was told that her normally 20/20 vision was now 20/200.

A retina specialist, Dr. Scott Pendergast at the Retina Associates of Cleveland, performed tests and referred her to Dr. Rula Hajj-Ali, a rheumatologist at the Cleveland Clinic who diagnosed her with Behcet’s disease. She has been able to control her Behcet’s under the care of Dr. Hajj-Ali.

When asked if there have been any positive things that have come out of her illness, Dovie emphatically says “yes!” Mentioning that she now has “a lot more time with my kids,” she also says, “I’ve learned a lot of patience and understanding.” She also mentions the time she has had to delve into her hobby of flower and vegetable gardening and how much she appreciates her eyesight.

When she lost her vision, she realized the only thing she had to go by on how things looked were her memories of sight. With her sight restored, she finds herself lingering on certain images, like watching her children eight-year-old Paige, seven-year-old David and 3-year-old Brooklynne playing. “When I see things, I don’t take them for granted anymore,” she says. “I remember what I see now.”

Your ticket for the: Dovie’s Story