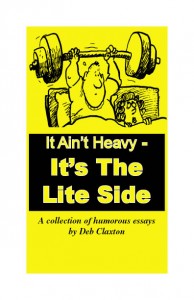 When Deb was diagnosed with Microscopic polyangiitis (MPA) in 2005, it was the last straw in a series of sad and tragic events that marked her life. Her first husband ran off with a married woman and she learned about it when she came home from work and found half her furniture and possessions missing. Her second husband was verbally abusive. She lost a son that died at birth, and the biggest tragedy in her life was the unexpected death of her 16 year old daughter.

“When my son died I was crushed, but when my daughter died I was completely devastated,” Deb said. “I had always relied on my sense of humor to get me through bad times, but it was gone. I never thought I would laugh again. Then the days turned into weeks, and the weeks turned into months, and one day I heard myself laughing. Still I thought my sense of humor was gone forever. Just when Deb had finally moved on with her life, she found out that she had MPA.

“All I could think of was why me, God? Hadn’t I been through enough already and now this? I became angry and bitter and stopped going to church,” Deb explained.

She might have remained bitter and angry, but all that changed when she went to her first doctor’s appointment at the Mayo Clinic.

“The Mayo Clinic is a huge medical facility. I saw all kinds of people there and most of them were in worse shape than I was. I decided to quit feeling sorry for myself and to start counting my blessings instead,” Deb said.

In 2009, Deb almost lost her life when blood started hemorrhaging into her lungs and she stopped breathing on her own. She spent 21 days in the hospital including five days in the ICU. When she was released, she was too sick to go back to work and lost her job as a newspaper editor that she held for 13 years.

“I always wanted to write a book, and I figured it was now or never,” she said. “When I first started working at the newspaper, I wrote a popular humor column. A friend suggested I turn my columns into a book. When I started reading them again, my sense of humor started to come back and I wrote new humorous material for the book. I wasn’t trying to write the next Great American novel. I just wanted to make people laugh and forget their troubles for a while.”

While doing research, Deb learned about the health benefits of laughing. It can lower blood pressure, reduce pain levels, and help lower cholesterol. Laughter causes the brain to produce a variety of chemicals that naturally make you feel better.

Deb credits her book project along with pulmonary rehab for helping with her recovery. Today her vasculitis is in remission although she still has breathing problems.

“It Ain’t Heavy – It’s The Lite Side” by Deb Claxton, is available at Amazon.com. Deb is hoping to sell enough copies so that she can donate some of the profits to the Vasculitis Foundation.

Your ticket for the: Deb’s Story