Brandon Hudgins, elite runner, and vasculitis patient, continues his quest to make the 2016 U.S. Olympic Team!  On Thursday, July 7th, Brandon qualified for the semi-finals of the 1500m race with a time of 3:43.25 during the Olympic Team Trials in Eugene, Oregon.  The semi-finals will be held on Friday, July 8th at 4:12 p.m. PST.  Please check the NBCSN website to find the broadcast times for the Men’s 1500m races.  Schedules are subject to change.

Support Brandon and the VF
In honor of qualifying for the 2016 U.S. Olympic Team Trials, the Vasculitis Foundation has created an exclusive poster showcasing Brandon’s grit and perseverance.  This 11×17 poster was designed by John Fries, a graphic artist in Pittsburgh.  Each poster is personally autographed by Brandon.

Proceeds will go directly to the VF to help its mission of raising vasculitis awareness, funding vasculitis research, and helping patients manage this serious disease. Click here to purchase.

Background
Elite runner, and vasculitis patient, Brandon Hudgins, has qualified to compete in the 2016 Olympic Trials in Eugene, Oregon, July 7-10.  Brandon will be competing in the Men’s 1500m races to hopefully become one of the three athletes chosen to represent the U.S. in this event at the 2016 Olympics in Rio in August. 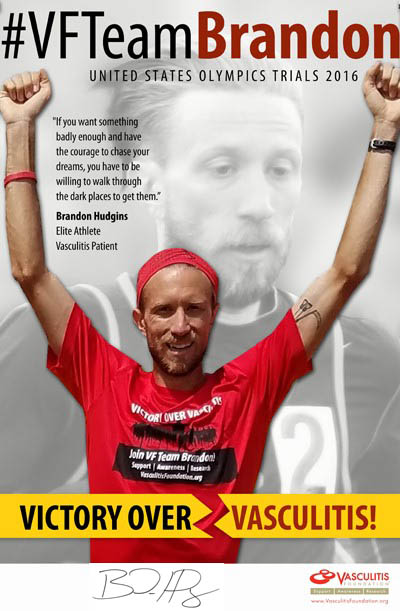 The 2016 U.S. Olympic Team Trials  Track & Field will be broadcast on NBC Sports.  Please check the NBCSN website to find the broadcast times for the Men’s 1500m races. 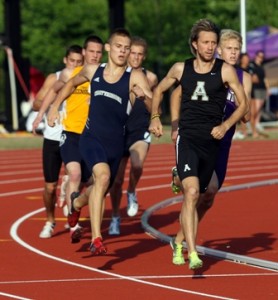 The Vasculitis Foundation (VF) is pleased to announce that elite runner and vasculitis patient Brandon Hudgins yesterday became one of only 30 runners in the nation eligible to compete for a spot on the United States Olympic Team. The USATF trials take place July 1-10 in Eugene, Oregon.

“The Vasculitis Foundation could not be more proud of Brandon,” said Joyce A. Kullman, executive director of the Foundation. “To say that we’re excited about his reaching his goal is a huge understatement. We are his biggest cheerleaders.”

This spring the Foundation partnered with Hudgins to launch “Victory Over Vasculitis: VF Team Brandon,” an initiative designed to support his efforts to increase awareness of his rare, autoimmune disease while attempting to qualify for the Olympic Team. The Vasculitis Foundation is committed to improving the lives of current and future patients and serves as the definitive resource for those seeking information about vasculitis.

“Through Brandon’s ongoing athletic training and boundless energy as an advocate for vasculitis awareness,” says Kullman, “he exemplifies our philosophy that patients with autoimmune diseases can live rich, full lives.” She notes that, since 1986, the Vasculitis Foundation has empowered patients through disease education, raising awareness of vasculitis in the general public and medical community, and funding research to determine the cause, develop more effective treatments, and discover a cure.

Hudgins, 28, a native of Rock Hill, S.C. who began running competitively as a high school student, holds a Bachelor’s degree in Physical Education: Fitness and Wellness from Winthrop University and a Master’s in Exercise Science: Strength and Conditioning from Appalachian State University. His illness was diagnosed in 2008 following a seven-month struggle with severe sinus symptoms.

Last summer, Hudgins became only the 448th American to run a mile in less than 4-minutes when he completed the Sir Walter Miler in Raleigh, N.C. in 3:59.67. At the time, Runner’s World wrote that he was most likely the first to do so after overcoming granulomatosis with polyangitis (GPA), a rare autoimmune disease that affects the blood vessels, and quoted him as saying that, “If you want something badly enough and have the courage to chase your dreams, you have to be willing to walk through the dark places to get them.”

Partnering With the Vasculitis Foundation

A passionate advocate for vasculitis awareness, Hudgins formed a partnership with the VF this year because he wants to help raise awareness among the medical community and the public about  the needs and challenges facing all patients with autoimmune vasculitis. Through the campaign “Victory Over Vasculitis: VF Team Brandon,” Hudgins leverages his public profile to create awareness of autoimmune diseases.

As part of the campaign, Hudgins invites the public to become involved in VF Team Brandon’s Virtual 100K challenge. In addition to supporting his Olympic training, the team has set a goal to run collectively or walk 100,000 miles by the end of 2016. To date, more than (Number) people from around the world have joined the team. Each member is asked to log his or her weekly miles, which are counted toward the grand goal. There is no cost for participating. More information is available at www.vasculitisfoundation.org.

Your ticket for the: Brandon Qualifies for the 1500m Semi-Finals – Competes July 8th