2021 ACR/VF Guideline for the Management of Polyarteritis Nodosa (PAN)

These recommendations provide guidance regarding diagnostic strategies, use of pharmacologic agents, and imaging for patients with PAN.

Authors
About these Guidelines
Abstract

For the evidence report, the Literature Review team summarized 127 articles to address 21 PICO questions for PAN.

The following recommendations and ungraded position statements are for systemic PAN and do not apply to isolated cutaneous or HBV-related PAN.

Recommendations and Positions for PAN

Tables and Figure #1 for PAN 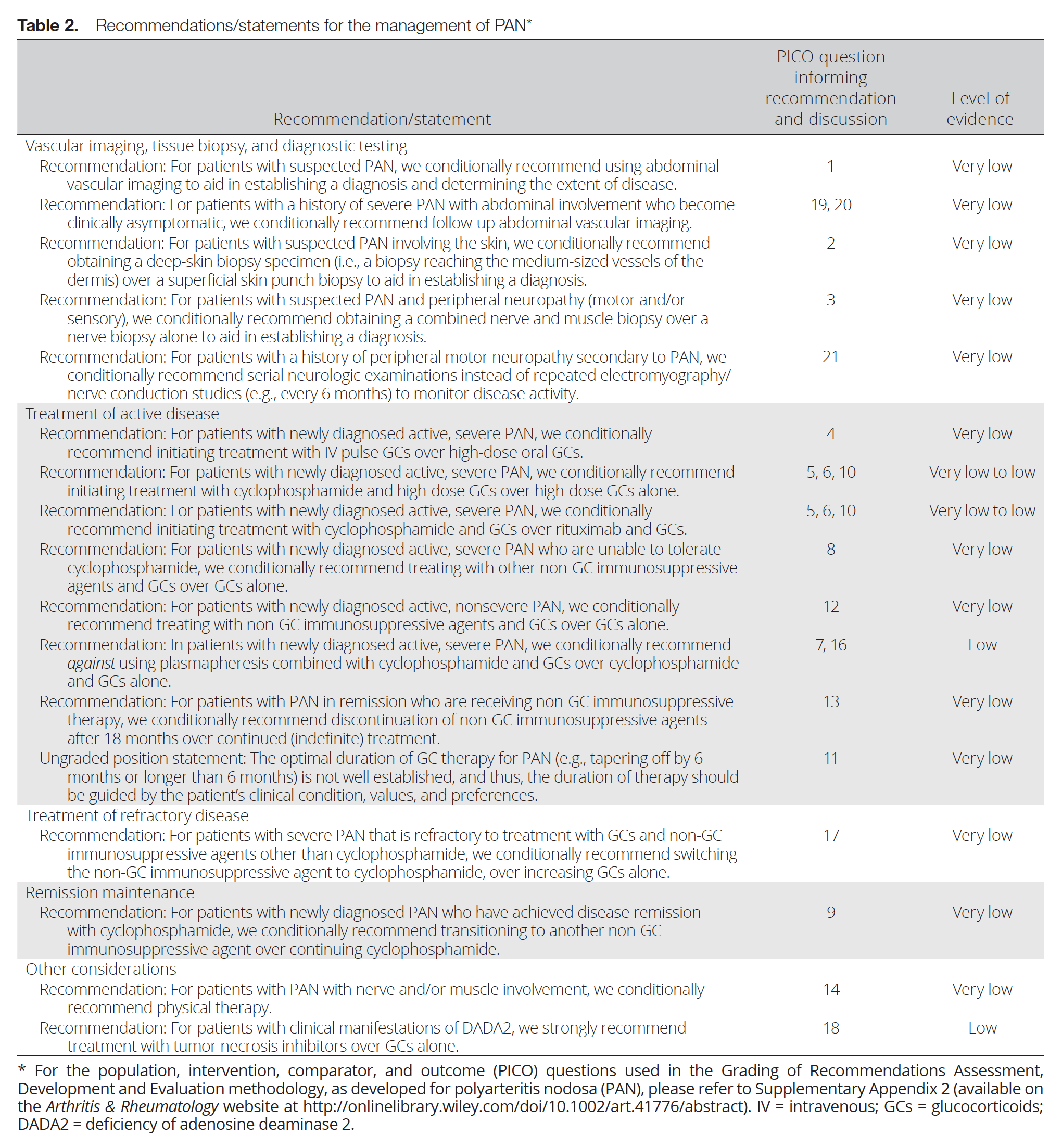 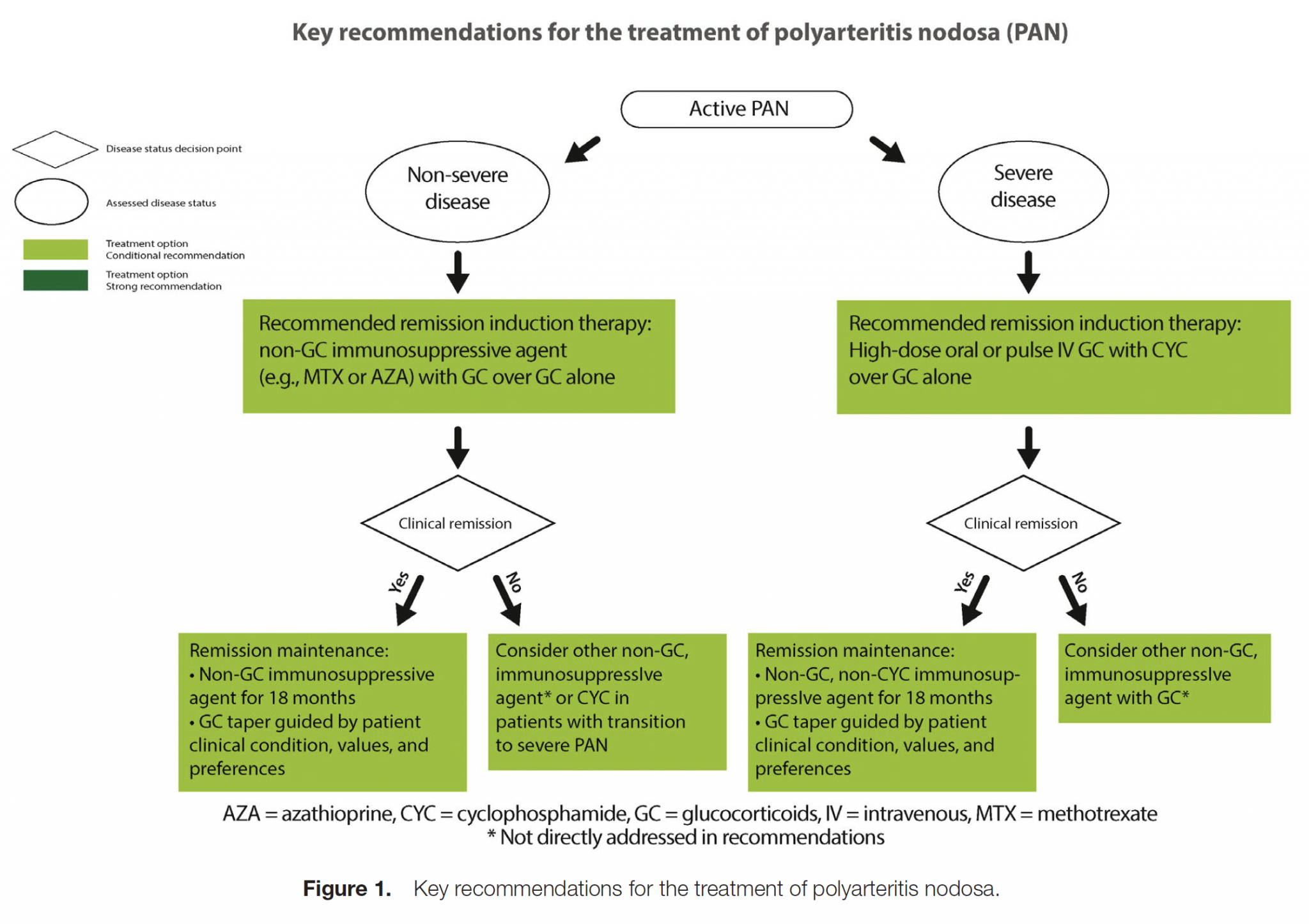 Recommendation: For patients with suspected PAN, we conditionally recommend using abdominal vascular imaging to aid in establishing a diagnosis and determining the extent of disease.

Evidence for the use of routine diagnostic imaging is limited, with no comparative trials available. In single-arm studies that were performed when diagnostic criteria for PAN were not well defined, vascular imaging, in tandem with clinical signs and pathology, helped validate the diagnosis (8) and determine disease severity (9). This in turn can influence treatment decisions. Moreover, obtaining vascular imaging at disease onset facilitates identification of new vascular involvement during disease relapse. Vascular imaging may not be warranted if patients present with isolated findings such as mononeuritis multiplex or myopathy, or if there are no clinical features suggestive of abdominal arterial involvement (such as absence of gastrointestinal or genitourinary symptoms, including renovascular hypertension). For children, clinicians should be mindful of minimizing repeated radiation exposure.

Recommendation: For patients with a history of severe PAN with abdominal involvement who become clinically asymptomatic, we conditionally recommend follow-up abdominal vascular imaging.

Follow-up imaging permits assessment of disease control and treatment response. In the view of the Voting Panel, follow-up imaging is particularly important when baseline imaging demonstrates aneurysmal disease. The timing of follow-up imaging is dependent, in part, on clinical factors, such as the extent and severity of vascular abnormalities, overall disease course, and response to therapy.

However, indefinite routine vascular imaging should be avoided if the abdominal vascular disease is shown to be quiescent.

Recommendation: For patients with suspected PAN involving the skin, we conditionally recommend obtaining a deep-skin biopsy specimen (i.e., a biopsy reaching the medium-sized vessels of the dermis) over a superficial skin punch biopsy to aid in establishing a diagnosis.

Indirect evidence (found in nonrandomized studies or studies in which findings were not primary aims) suggests that evaluation of deeper tissue is more effective at establishing a diagnosis of PAN (15,16), since a deeper-tissue sample is more likely to capture a medium-sized vessel. A deep-skin biopsy can be performed by a dermatologist as a deep (or “double”) punch biopsy and does not necessarily require invasive resection. This recommendation had strong support from the Voting Panel but remains conditional due to limited evidence.

Recommendation: For patients with suspected PAN and peripheral neuropathy (motor and/or sensory), we conditionally recommend obtaining a combined nerve and muscle biopsy over a nerve biopsy alone to aid in establishing a diagnosis.

Several studies suggest an increased yield with nerve and concurrent muscle biopsy as opposed to nerve biopsy alone (15–19). However, the biopsy should sample involved tissue and not be performed “blind” (i.e., sampling tissue that does not appear to be clinically affected). Of note, biopsy of an affected purely sensory nerve (e.g., sural nerve) is favored to avoid motor deficits.

Recommendation: For patients with a history of peripheral motor neuropathy secondary to PAN, we conditionally recommend serial neurologic examinations instead of repeated lectromyography/nerve conduction studies (e.g., every 6 months) to monitor disease activity.

This recommendation is based on the opinion of the Voting Panel due to a lack of published evidence addressing the issue. Repeated electromyography in a patient with stable symptoms is not recommended due to the invasive nature of this study. However, repeated electromyography/nerve conduction study would be warranted if there were uncertainty as to whether a new (or worsening) process was developing.

Treatment of active disease for PAN

While case reports have recently raised the question about the efficacy of rituximab use in PAN (28–30), its efficacy in PAN remains uncertain due to the lack of comparative or large single-arm studies in this disease.

Recommendation: For patients with newly diagnosed active, severe PAN who are unable to tolerate cyclophosphamide, we conditionally recommend treating with other nonglucocorticoid immunosuppressive agents and glucocorticoids over glucocorticoids alone.

In a single trial conducted in 1995, the use of plasmapheresis in PAN was evaluated, but a distinction between PAN and HBV-associated PAN was not made (33). Confidence intervals in this study were very wide. Thus, evidence supporting the use of plasmapheresis in non–HBV-associated PAN is unavailable and the benefit unclear. Plasmapheresis may be considered in catastrophic cases unresponsive to the recommended aggressive immunosuppressive therapies and may have a role in the management of HBV-related PAN.

Evidence for this recommendation is based on a single study that was performed in 1979 (31). Although a significant number of patients with PAN have disease relapse, the majority experience monophasic disease (20). Indefinite treatment may therefore not be needed. Disease needs to be in sustained remission (Table 1) before discontinuing therapy.

Ungraded position statement: The optimal duration of glucocorticoid therapy for PAN (e.g., tapering off by 6 months or longer than 6 months) is not well established, and thus, the duration of therapy should be guided by the patient’s clinical condition, values, and preferences.

In PAN, studies to determine the optimal length of time for glucocorticoid use have not been performed. In studies of other types of vasculitis (34), faster tapers led to more flares, which were often not organ-threatening and may have been mild. The Patient Panel preferred a longer taper, as a primary concern was disease control rather than glucocorticoid toxicity. Thus, duration of glucocorticoid use should be influenced by the patient’s clinical condition, values, and preferences.

Treatment of refractory disease for PAN

Based on the effectiveness of cyclophosphamide in new-onset severe PAN (26), indirect evidence suggests that cyclophosphamide should be used in patients with PAN that has evolved from a nonsevere presentation to one that is severe and does not adequately respond to other immunosuppressive agents.

Recommendation: For patients with newly diagnosed PAN who have achieved disease remission with cyclophosphamide, we conditionally recommend transitioning to another nonglucocorticoid immunosuppressive agent over continuing cyclophosphamide.

Due to its toxicity, cyclophosphamide therapy should not continue indefinitely and should generally be limited to 3–6 months per course (21). Based on the experience in antineutrophil cytoplasmic antibody–associated vasculitis, transitioning to another less toxic agent such as methotrexate or azathioprine is recommended once disease remission has been attained. Given the lack of clinical trials investigating remission maintenance in PAN, this recommendation was based on expert experience.

Other considerations for PAN

Recommendation: For patients with PAN with nerve and/or muscle involvement, we conditionally recommend physical therapy.

Indirect evidence for PAN is available for this recommendation from studies in inflammatory myositis. Based on this, we conditionally recommend this intervention due to its potential benefit and minimal risk. Physical therapy may be more beneficial for those with more substantial motor involvement. Patients on the Voting Panel expressed a high degree of enthusiasm for physical therapy as a modality for recovery and rehabilitation, in that they felt they had personally experienced benefit from physical therapy.

DADA2 was first described in a series of patients with an early-onset (often childhood) PAN-like vasculitis (35). DADA2 is characterized by recurrent strokes and skin changes and diagnosed using ADA2 sequencing or ADA2 functional assays, and ADA2 mutations have been identified in patients diagnosed as having systemic PAN (36). Although only 1 case series has been published, the strong signal of benefit of tumor necrosis inhibitors provides evidence that treatment with tumor necrosis inhibitors, instead of conventional immunosuppressive agents such as cyclophosphamide, prevents strokes (35,37). Thus, physicians should consider DADA2 in the setting of a PAN-like syndrome with strokes, and if confirmed, we strongly recommend use of tumor necrosis factor inhibitors. The Voting Panel voted for a strong recommendation despite the small number of cases, stressing the prevention of severe adverse events.

For every $50 donation, we can reach one more person with the guidelines. Donate today!

The Vasculitis Foundation would like to thank Genentech for supporting our efforts to spread the guidelines to the vasculitis community.

Your ticket for the: 2021 ACR/VF PAN Guidelines