Two winners tied for first place and one received an honorable mention in the Vasculitis Foundation’s (VF) 2020 Recognizing Excellence in Diagnostics (V-RED) award program. Now in its seventh year, the program calls on patients worldwide to nominate a medical professional they want to recognize for making a critical, early diagnosis of vasculitis. Sixty-six nominations were submitted this year.

“What a great time it is to honor a medical professional who made an excellent call,” said Karen Hirsch, VF Board member and program founder. Karen created the award program after her son, Michael, was diagnosed with granulomatosis with polyangiitis (GPA) in 2011 by Juanita Mora, MD, an allergist/immunologist at the Chicago Allergy Center. Dr. Mora’s quick diagnosis helped Michael receive timely treatment, which helped lead to his remission. 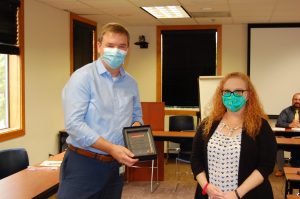 Kimberly Meirose was experiencing ongoing symptoms for some time with skin lesions, along with flu-like symptoms and swollen lymph nodes. Her previous provider treated her multiple times with the same medications but her symptoms never resolved. She went to see her family physician, Dr. Gerald Farnell, at the Salem Clinic at Inland Shores in Keizer, Oregon. Dr. Farnell reviewed her previous treatments and lab work. He was concerned about possible Behçets disease as a diagnosis and scheduled an appointment for her with his colleague, Patricia Morrison, MD, at the Salem Clinic. A biopsy was consistent with the diagnosis of Behçets. Kimberly started Imuran®, high doses of prednisone and was then referred to a rheumatologist. “I was very scared but Dr. Farnell explained that since we now knew what was really happening, we could treat it and I’d start feeling better. It was very comforting,” Kimberly said.

Sue Houx, FNP-C, had known her patient, Eric Hermann, for years and was familiar with his medical history and recent treatment of an earache, which turned out to be an early sign of his disease. Sue, a family nurse practitioner at the Primary Medical Group in Ventura, California, quickly made the diagnosis of Eric’s GPA in 2018 through blood work, with the help of her colleague, Becky Wades, MD. Eric was referred to Tanaz A. Kermani, MD, a rheumatologist at UCLA Health and was initially put on prednisone and Bactrim. He has since undergone Rituxan® treatments to minimize his flare-ups. “I feel I’m doing incredibly well thanks to Sue, Dr. Wades, Dr. Kermani and my supportive family,” Eric said. “I thank them all for their dedication to the VF Foundation.”

For Elijah Elbert, it was thought he was just a 7-year-old with behavior challenges who needed therapy. Elijah’s doctor referred him to neurologist Daniel Jones, MD, of Arlington, Ohio, who suspected something else. An electroencephalogram showed spikes in the electrical signals in Elijah’s brain, which led to the diagnosis of a seizure disorder. But Dr. Jones didn’t stop there—he ordered two antibody tests—both of which were positive. “At the time, Dr. Jones diagnosed Elijah with central nervous system vasculitis secondary to lupus,” Elijah’s mom, Myranda Elbert, said. Dr. Jones started him on oral prednisone and he improved immediately. “Dr. Jones has been amazing and is giving our son a chance at life. We were losing him and I had no one who would listen to me until we met Dr. Jones.”

In addition to the tied winners and honorable mention, all medical providers who were nominated will receive a certificate of appreciation from their nominee.

The VF thanks our sponsors for supporting the 2020 V-RED Program. Your ticket for the: VF Announces 2020 V-RED Award Winners