Dr. Sarah Durney of Powell Valley Healthcare in Powell, Wyoming, has been selected as a recipient of the 2015 Vasculitis Foundation’s Recognizing Excellence in Diagnostics (RED) Award. Early diagnosis is critical, and Durney, who loves patient interaction and medical sleuthing, reached a preliminary conclusion in under two weeks for patient and nominator Angie Kissner. 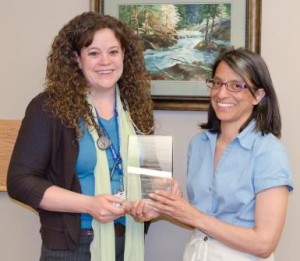 “I have the worst flu of my life.”

Dr. Sarah Durney, however, wasn’t so sure. After talking to Kissner, she suspected an autoimmune disease and made a referral to a rheumatologist. But there was a hitch: a two-month waiting period for an appointment.

Undeterred, Durney ordered the P-ANCA, C-ANCA and ANCA screens to get a more accurate diagnosis.

“She suggested I do some research but to take the results ‘with a grain of salt’. Life expediencies from 6 months to 5 years are all I remember reading. Our son was 19 and our daughters were 14 and 11–I wanted to see them grow up. I have no doubt that because Dr. Durney was aggressive in diagnosing me I am as healthy as I am.”

Today, Kissner is in remission. “When I told her I was in remission she gave me a bigger hug than anyone except my husband!” Kissner laughs. “Dr. Durney is a very calm person.  She keeps things in perspective and I find that comforting. She has taught me to be watchful but not to get overly worried.

“Dr. Durney made me feel comfortable from the moment she walked into the exam room, and I had confidence in her,” Kissner recalls. “She listens carefully and asks a lot of questions to find the answers. She described me one time as a puzzle and she loved to solve puzzles. It made me sure that she would do whatever she could to help me feel better. I believe that she sees medicine as a calling and not a job.”

In fact, Kissner considers Durney an important part of her family.

“While she doesn’t like to hear it, we credit her for saving my life,” Kissner insists. “Her quick diagnosis is responsible for my good health today–that is a gift that she has given my family.”

Dr. Milan Shah, an ophthalmologist at Midwest Eye Institute in Indianapolis, Indiana, has been selected as a recipient of the 2015 Vasculitis Foundation’s Recognizing Excellence in Diagnostics (RED) Award. Diagnosing vasculitis often requires connecting seemingly unrelated symptoms, something Shah is especially adept at, according to nominator Conney Freese-Posthuma.

Conney Freese-Posthuma’s son Jacob had been dealing with a lot of health problems–nose bleeds, migraines, bloodshot eyes and more–for a long time with no real answers. 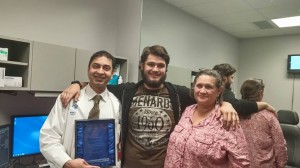 “Each doctor we saw was only looking at some of his symptoms,” she recalls. “Dr. Shah was the first one who put them all together. He not only had the knowledge to make the diagnosis, but followed through.”

The diagnosis was granulomatosis with polyangiitis (GPA/Wegener’s).

“Dr. Shah was very serious at first and I think he thought that we weren’t taking the disease as seriously as we should. As a family, we have a pretty dark sense of humor and sometimes being sarcastic and making jokes is how we deal with hard situations,” she explains. “Over time, he’s lightened up and makes jokes with us now.”

“There were no symptoms from the lesions in his lungs yet, but if Jacob had not been diagnosed and the GPA had not been treated when it was, it might have been too late to help him by the time those symptoms appeared,” she asserts.

“I hate buzzwords, but Dr. Shah was very proactive in getting us to other doctors, and making sure the insurance company would cover the infusions, which had only been approved for Wegener’s a few months before Jacob was diagnosed. Dr. Shah keeps in touch with the other doctors, especially the rheumatologist, Dr. Wu. Jacob and I joke about them being pen-pals.

Since getting diagnosed, Jacob is “fairly healthy and can live his life without being miserable. He just started a new job that he loves as a bicycle mechanic. If we’d kept treating symptoms piecemeal, if Dr. Shah hadn’t figured it out, who knows where we’d be?”

Your ticket for the: 2015 V-Red Award Winners Announced