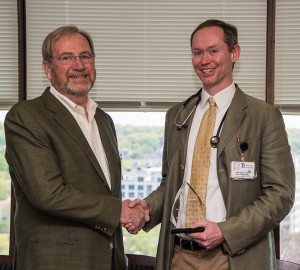 David Tait, a resident of New Canaan, Connecticut, nominated Dr. Sullivan for the VF’s 2016 V-RED Award believing that it was Dr. Sullivan’s early diagnosis of vasculitis that gave him a more positive health outcome.  In 2014, after suffering a heart attack, Tait was taken to the Norwalk Hospital Emergency Department where he was placed under the care of Sullivan.

Dr. Sullivan said that as a hospitalist  he reviews each patient’s prior medical history and test results.  He becomes a clinical data detective looking at all of the patient’s medical records for diagnostic red flags.

In David’s case, it was an unusually high eosinophil count that captured Sullivan’s attention.  Based on his findings, Sullivan was able to diagnose Tait with eosinophilic granulomatosis with polyangiitis (EGPA /Churg-Strauss Syndrome), a rare autoimmune systemic vasculitis. 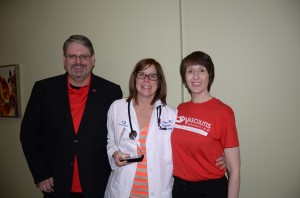 Kinney was nominated for the award by her patient, Michael Gunderson, a resident of Davis, Illinois.  Gunderson was suffering from chronic symptoms that included severe sinus infections, joint swelling, and fatigue.  When the symptoms grew worse and didn’t respond to multiple courses of antibiotics, Gunderson went to Kinney who works as a hospitalist at the Monroe Clinic.

“We were grateful that someone finally made a diagnosis, and that I was going to start an aggressive treatment plan, and maybe, just maybe, get me well again,” says Gunderson.

“Without the GPA diagnosis by Kate, I think I can safely say I wouldn’t be here.”

Kinney was presented the V-RED Award during a recognition ceremony at the Monroe Clinic earlier this year. 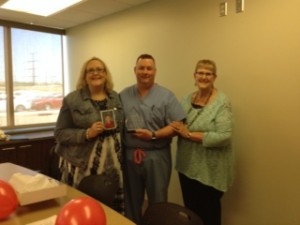 It is not unusual that a medical specialist is one of the first doctors to see a patient suffering the early onset of vasculitis symptoms.

This was the case for Jodi Resnac, who was under the care of Dr. Jeffrey Raines, a general obstetrician/gynecologist and supervisor for the Obstetric/Gynecology Department of Fairview Medical Group in Kingsman Arizona.

Jodi immediately contacted her mother, Jan Petersen, with the news.  It was particularly devastating to Jan because she was familiar with the disease.  “When Jodi told me the news, I knew exactly what she was talking about because my sister had had a series of five collegian diseases from 1975 until her death in 1981.  Wegener’s being one of them.  When Jodi told me the name of the disease, I just put my head on my desk and tried not to cry,” Jan said.

Your ticket for the: 2016 V-RED Award Winners